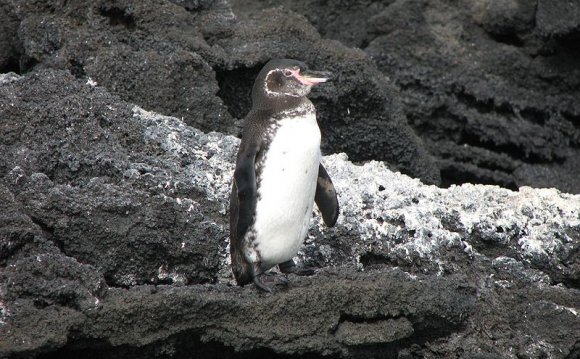 Where is the Galapagos?

Galapagos penguins, the rarest and most endangered penguin species in the world, are the only penguins that can be found at the equator. Unlike most cold water penguins, they have several adaptations that allow them to tolerate the warmer climate of Galapagos. One of the reasons for their endangered status is that limited options for nest sites exist in the Islands. Many nests used 40 years ago either no longer exist, are used by marine iguanas, or now get flooded.

To increase the population of Galapagos penguins, Dr. Dee Boersma of the University of Washington and her research team have built 120 high-quality, shady nest sites (“penguin condos”) since 2010 on three major islands where penguins currently breed — Isabela, Fernandina, and Bartolomé. The nests were constructed out of natural materials such as lava rocks and are monitored two to three times per year to determine if artificial nest sites do, in fact, increase reproduction and reproductive success of penguins when food is available. The long-term goals of this project are to reverse the decline of the Galapagos penguin population, and to strengthen the population so that it can better withstand the impacts of more frequent and intense climate fluctuations caused by El Niño events.

Dr. Boersma and her team have recommended that the Galapagos National Park create a marine protected area in Elizabeth Bay, as the Mariela Islands located in the Bay represent the highest density breeding area for Galapagos penguins. Providing special protection for this area will also benefit many other species of seabirds, marine mammals, and fish. Dr. Boersma also recommends creating a second Penguin Conservation Zone around Bartolomé Island.

Dr. Boersma is currently compiling a photo database with the help of visitors to the Islands, a form of citizen science whereby visitors upload their photos of Galapagos penguins with the date and location of the photo. From this database, her research team can determine when penguins are molting and track when juveniles appear in the population. To learn more about the project and to submit photos, visit: iGalapagos.org.

Introduction to the Galapagos: A Triple Bottom Line ...