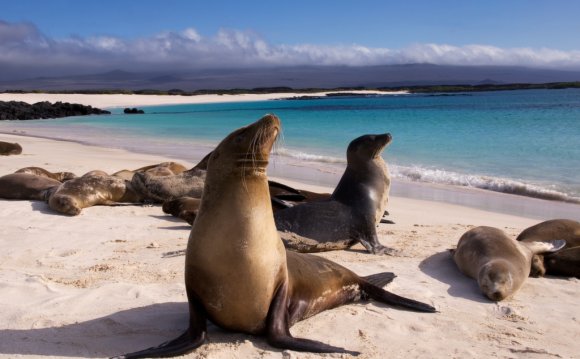 Tourism in the Galapagos Islands

The Galapagos Islands are a natural wonder unlike any other place on the planet. The islands are a volcanic archipelago teaming with one-of-a-kind animals and plants, thanks to a very remote location more than 600 miles off the coast of Ecuador in the Pacific Ocean, and the fact that many species uniquely evolved since it’s difficult to migrate from one island to the next. (Each island has its own distinct landscape—the destination is, after all, the spark that fueled Charles Darwin’s Theory of Evolution).

Travelers are flocking to the Galapagos Islands largely due to the awe-inspiring animals (think: playful sea lions, century-old giant tortoises, and prehistoric-looking marine iguanas) and easier travel to the remote destination in recent years (there were only a few flights to the islands a week in the 70s, and today there is an average of about six a day). In fact, visitors to the Galapagos surged from only 11, 765 in 1975 to a whopping 204, 395 in 2013, according to the Galapagos National Park Service.

This tourist boom is impacting the delicate ecosystem by keeping the demand for flights high and causing a bigger carbon impact; requiring more cargo ships to up the odds of oil and other fuel spills—not to mention ocean contamination from boat paint; increasing trash with limited ways to dispose of it; causing degradation to natural environment with more people visiting fragile habitats; draining the already-limited fresh water supply; and increasing the risk of invasive species hitchhiking to the islands on ships and planes carrying tourists. Sadly, the Galapagos Islands were added to the list of World Heritage Sites in danger in 2007.

Even though an influx of travelers is putting this delicate eco-system at risk, there are ways you can use travel to help preserve rather than destroy this double World Heritage site.

“I think the issue isn’t so much more visitors as it is more uneducated visitors, ” says Jonathan Brunger, secretary on the board for the International Galapagos Tour Operators Association (IGTOA) and general manager of Adventure Life, a sustainable travel company that arranges trips to the region. “The more the tourism industry here lowers its standards—such as by offering cheaper price points and making it easier to arrange travel on your own—the more you run the risk that the travelers themselves are not caring to book through responsible tour operators, but rather just going it alone.”

Brunger says low-budget tourism is a dangerous way for tourism to grow because, while the national park regulates the number of tourist ships cruising the Galapagos and caps the number of visitors, there aren’t the same strict regulations for people doing hotel stays with day trips to beaches. (For example, cruise ships can’t land on any given site more than once during a 15-day trip to limit the number of visitors to any one specific spot). Urban growth is also an issue because more and more mainlanders are attracted to the islands with the opportunity to make money off less-regulated DIY tourism (though the government tries to put caps on the number of people moving to the islands from the mainland too).

“My feeling is that the biggest threat isn’t within the national parks that are heavily protected by the government—all tourists must be with a certified guide when visiting a protected area—but within and around the inhabited islands of Santa Cruz, San Cristobal, and Isabela, which can obviously spill over and threaten the marine national park, ” says Brunger.

Here are the top things travelers should consider before visiting to ensure that you’re helping preserve this ecological gem rather than contributing to its demise.

Use local guides. Ask the tour company you’re booking through if they use local guides to ensure that a family is receiving income from tourism dollars rather than other harmful activities like illegal fishing. “For generations families have relied on fishing, but now tourism is the way to make money, ” says Brunger. “Plus, locals see the value of protecting the environment to become real stewards of the Galapagos, and it is passed on to their children.”

Book though a responsible, sustainable tour company. Ask if the company is a member of the International Galapagos Tour Operators Association. IGTOA provides funding to organizations focused on conservation, such as the Charles Darwin Foundation, WildAid, Ecology Project International, and Sea Shepherd.

Most tours include a stop at this research and educational center on Santa Cruz. Your tourism dollars will help sustain the work being done to preserve and clean up the Galapagos (the Charles Darwin Foundation was behind the famous goat eradication which eliminated almost 80, 000 of the flora-eating mammals that were threatening the habitats of native tortoises and other animals), as well as help support the local economy. Tourism dollars and awareness created by tourism is what is keeping the Galapagos protected. “Visiting educational sites such as this allows people to leave educated with a better understanding about some of the issues impacting the environment, and hopefully gives you a little more stake in conservation after you leave, ” says Brunger.

Tread lightly. You know the basics, such as don’t litter, don’t walk off the marked paths, and obey the park guidelines (such as don’t stuff an iguana in your backpack). Be sure to maintain recommended distances with sea lions and other wildlife so as to ensure they don’t become too tame. Consider bringing your own reusable water bottle so you can fill up at the cooler on your ship or at your hotel rather than contribute to the trash problem by using plastic bottles that you toss after you’re finished.

Swimming In The Galapagos Islands