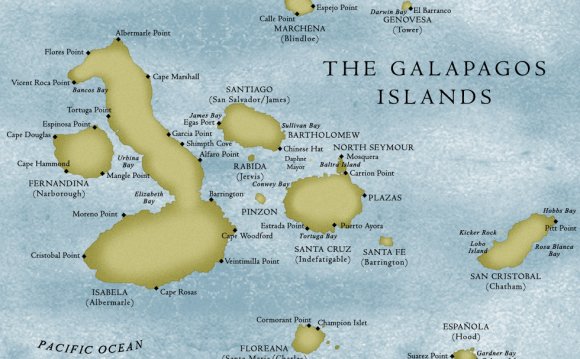 What are the Name of the Galapagos Islands?

In the Galapagos Islands, a variety of fascinating reptile species can be found. It is typical that islands far from the continent have few native mammal species. The isolation makes it hard for mammals to survive the long journey afloat at sea, but reptiles are a little hardier in this regard. The reptilian ancestors of the tortoises and iguanas were able to survive the voyage.

In the absence of large mammalian herbivores, the tortoises evolved to fill a unique ecological niche. The tortoise’s shell is characteristic to the type of habitats it lives in. In the humid highlands, they have dome-shaped shells and graze on low laying foliage. On arid islands, they have saddle-shaped shells and long necks to stretch their heads to reach higher vegetation.

The giant tortoises are symbols of ecological preservation and the fragility of the Galapagos ecosystems. Their numbers were decimated over the centuries as whalers slaughtered them for meat and oil. Introduced animals such as goats damaged their habitats, and feral cats and dogs preyed upon babies. Conservationists are hard at work to preserve the giant tortoises.

Visitors to the Galapagos Islands are sure to encounter giant tortoises when visiting the breeding centers located on various islands. A visit to these centers is educational and a place to see conservationists at work raising baby tortoises to be released in the wild when they are adults. The famous late Lonesome George, the last of the Pinta Island tortoises, lived in such a center.

Other noteworthy Galapagos reptiles are the iguanas. Their ancestors came from the South American mainland and diversified into land iguanas and marine iguanas as they took on different roles in their new environments. There are three species of land iguanas on the islands and several subspecies of marine iguanas throughout the archipelago.

The Galapagos land iguana lives on six different islands whereas a unique species is found on Santa Fe Island. The third species is the pink land iguana found only on the slopes of Wolf Volcano on Isabela Island. It is the most ancient species in the land iguana lineage but the most recent to be described scientifically.

The marine iguana is the only seafaring lizard in the world. These unusual reptiles dive into the ocean to eat algae off of the rocks beneath the waves. They return to the coast to bask in the warm sun after their dives in the chilly ocean water. They also have a unique glad in their nostrils to excrete excess salt from their bodies.

With such unique residents, it is no wonder the Galapagos is a world famous wildlife destination. Plan your adventure in the islands today. The Galapagos experts will help you book your perfect itinerary, and you can meet the giant tortoises and iguanas of the Galapagos Islands for yourself!

Galapagos Birds Watch Birds Of The Galapagos Islands with ...

Bird Colonies of the Galápagos Islands