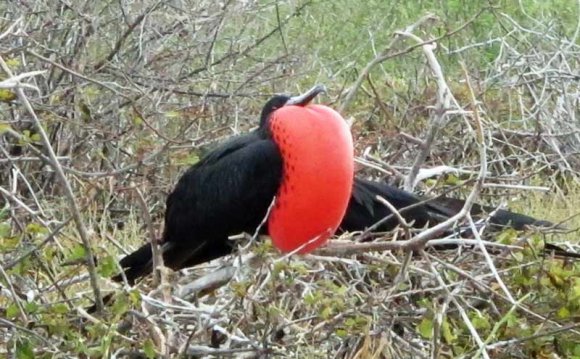 What Islands did Charles Darwin visit?

Exploring the Cocos Islands
The Begale arrives at South Africa
Arrival at St. Helena Island
The return to South America
The Azores are Spotted
Finally home in England!
The Fate of the Beagle

On April 1st HMS Beagle arrived at the Keeling Islands which were discovered by Capt. William Keeling in 1608 (they are now called the Cocos Islands). They put in at Port Refuge, then sailed to Direction Island under very high winds.

These islands are composed entirely of coral and Darwin surmised that they were once part of a large submerged coral reef. He explored Direction Island for a few days, but found nothing but cocoa-nut trees and coral strewn beaches. Despite the relative desolate state of the islands Darwin did manage to collect a few small birds, one species of lizard, several species of insects and a whole lot of coral! He also theorized that plant seeds must have migrated across the oceans to these islands. The only inhabitants of the islands were Malays and a few English families.

1836 April 6
Darwin went with FitzRoy to an island at the head of the Cocos Lagoon.

1836 April 12
Today the Beagle sailed away from the Cocos Islands. They took cocoa-nuts, pigs, poultry, pumpkins, and turtles on board for food. They sailed past North Keeling Island, Chagos Islands and then to Rodriguez Island.

1836 May 9
The Beagle sailed out from Port Louis, passing near Madagascar.

1836 May 31
The Beagle arrived at the southern tip of Africa at Simon's Bay near Cape Town.

1836 June 1
Darwin traveled to Cape Town which was about twenty miles away. The landscape was rather bleak. He arrived late at night and had difficulty finding lodging, eventually finding a room at a boarding house.

1836 June 3
A packet ship arrived with mail for HMS Beagle. Darwin went to pay a visit to Sir John Herschel. He had been living here since 1833, having been put in charge of the new Royal Observatory at Cape Town. Darwin was pleased to discover that Herschel had a keen interest in natural history. They had many conversations about volcanoes, earthquakes, the movement of continents, the origin of mankind and how new species came into being. NB - Charles Darwin would end up buried next to Sir John Herschel in Westminster Abbey, London.

1836 June 29
Today the Beagle crossed the Tropic of Capricorn.

1836 July 8
HMS Beagle arrived at St. Helena Island where they remain for five days. Darwin found a place to stay near Napoleons Tomb. He described the island as a desolate place. It was essentially a giant mountain of rocky lava rock in the middle of the Atlantic ocean, except inland where the scenery was more akin to the landscape of Wales. Darwin spent most of his time here exploring the geology of the island. Nearly all the species of plants have been introduced from England. About 5, 000 people lived on the island. Darwin had an elderly man as a guide and they took long walks every day.

1836 July 14
At about noon the Beagle set sail for Ascension Island.

1836 July 19
The Beagle arrived at Ascension Island in the evening. The island was inhabited entirely by British marines and a few liberated Africans from slave ships. They stayed at the island for four days, during which time Darwin climbed Green Hill, a volcano of 2, 817 feet in height. By now the entire crew was very anxious to get back to England.

1836 July 23
Capt. FitzRoy was concern that he may have taken faulty measurements at San Salvador so he ordered the Beagle on a detour back to South America.

1836 August 1
HMS Beagle arrived at Bahia de los Santos, Brazil. While the Beagle was out making corrections, Darwin took many walks in the tropical forests.

1836 August 17
Survey corrections were completed and the Beagle headed directly for England.

"I was delighted on the 17th to get on board the ship & in the afternoon to leave the shores of Brazil. We lie close hauled to the wind, & therefore there is a considerable pitching motion; I suffer very much from sea-sickness. - But it is on the road to England, in truth some such comfort is necessary to support the tedious misery of loss of time, health & comfort."

1836 August 31
Arrived at Porta Praya at the Cape Verde Archipelago, where they stayed just five days.

1836 September 5
The Beagle sailed for the Azores.

1836 September 9
The Beagle arrived at the Tropic of Cancer.

1836 September 20
HMS Beagle arrived at the Azores and anchored at Terceira near the town of Angra. The next day Darwin hired a horse and some guides and rode to the center of the island where an active crater was supposed to exist. What he found there was hardly a "crater" but rather a series of fissures in the lava rock with steam coming out of them. The days ride was not very productive to a naturalist. On another day Darwin traveled along a road on the coast and visited the town of Praya at the north-east extreme of the island. He returned on a road along the northern shore, then crossed the central part of the island on the way back to the Beagle.

1836 September 25
Today the Beagle called at the Island of St. Michael's for letters, then sailed for England.

1836 October 2
HMS Beagle finally arrived home after a voyage of four years, nine months, five days. They docked at Falmouth, England around 9:00 in the evening during a mild rain storm. Darwin set off immediately for Shrewsbury.