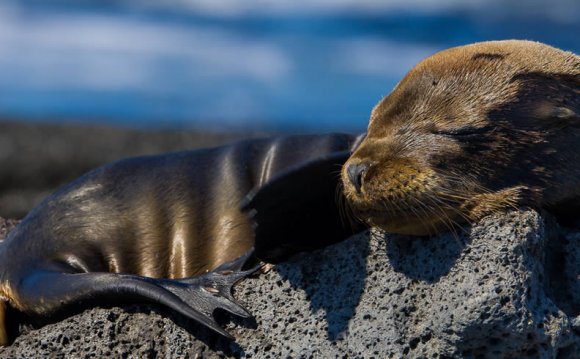 Depart USA.
Your exciting expedition to Ecuador and the Galapagos Islands begins this evening as you depart on your overnight flight.

Arrive Quito (Ecuador).Morning arrival in Quito, the colonial capital of Ecuador, located just 15 miles from the equator and surrounded by ice-capped volcanoes. En route to your first-class, centrally located hotel, you’ll enjoy a brief orientation tour of this wonderful city. Upon arrival, your rooms will be ready right away for you to freshen up and relax and then explore Quito independently during your day at leisure. You’ll have plenty of tips and suggestions from your guide for your independent sightseeing. Hilton Colon Hotel (B)

Quito.On a guided morning tour of Quito learn about its colonial past, history and culture. Visit the old town and see the Church of San Francisco, the first religious building constructed in South America by the Spanish. See the facade of La Compania, the city’s most ornate church. Admire the spectacular views of the Valley of Tumbaco. On a clear day, you’ll see the impressive volcanoes surrounding the city. Afterwards, drive north to the Equatorial Line Monument where you’ll have fun straddling the hemispheres in the middle of the world. The balance of the day is at leisure. (B)

Quito/ Galapagos Cruise: Las Bachas, Santa Cruz IslandAfter an early breakfast, fly to the island of Baltra, one of the gateways to the islands. Over the next five days cruise along and visit the enchanted Galapagos Islands, where you’ll see a variety of exotic wildlife. Board your upscale cruise boat, your base while exploring the islands and enjoy a welcome lunch onboard. This afternoon, enjoy a guided shore excursion of Las Bachas, a wet landing on a white-sanded beach backed by a saltwater lagoon, located at the northern coastline of Santa Cruz Island. Here, you will encounter an amazing variety of sea birds, marine iguanas, and turtles. Later, you’ll have a chance to swim and snorkel at the nearby white-sand beach.

Galapagos Cruise: Santiago IslandAfter breakfast, disembark your ship near Santiago Island, a spectacular island consisting of two overlapping volcanoes. Begin by exploring Buccaneer Cove, a popular site for pirates, sailors, and whalers in the 17th and 18th centuries. Buccaneer Cove is known for its impressive 50 meter tuff cliffs, a dramatic landscape made even more impressive by hundreds of seabirds perched on top of the cliffs. Two of the more recognizable rock formations are known as “The Bishop” and “Elephant Rock.” You’ll have the opportunity to snorkel or take a boat ride, but don’t forget to keep an eye out for the many sea lions relaxing by the beach.

Later in the day, you’ll visit Puerto Egas, a black sand beach with spectacular rock formations in the background. Walk along a trail that crosses the dry interior where marine iguanas are scattered around and the remains of a salt-mining enterprise can still be seen. Continuing down the trail will lead you to the Fur Seal Grotto, one of the few places in the Galapagos where fur seals can be seen. Later, you can swim and snorkel in search of octopuses, sea horses, starfish and other magnificent sea life. (B, L, D)

Galapagos Cruise: Rabida Island/Bartholomew IslandThis morning, explore the spectacular Rabida Island, home to the largest variety of lava types in the Galapagos and known for its high cliff along the north coast and its long sandy beaches. Follow a trail into the interior of the island that provides the occasional flamingo and leads you to a saltwater lagoon in the dry zone of the island. Along the beaches and lagoons, savor the views of the volcanic peaks and the clear waters or observe the sea lions and pelicans in their natural habitats. You’ll have the opportunity to snorkel, or if you’d like, enjoy a ride on a glass bottom boat.

In the afternoon, make your way to the breathtaking Bartholomew Island, a volcanic island where black lava fields contrast with lush green vegetation and spectacular white sand beaches. Enjoy the beautiful beach or hike to the summit of the island where you’ll enjoy an impressive view of the surrounding islands. During the hike, you will pass by marine iguanas, lava lizards, and more. At the summit, marvel at Pinnacle Rock, the remains of an eroded tuff cone, leans into Bartholomew’s northern bay and provides one of the most recognizable landmarks in the Galapagos Islands. You will also encounter small, friendly companions: the Galapagos penguin, the only existing species of penguin in the equator area. (B, L, D)