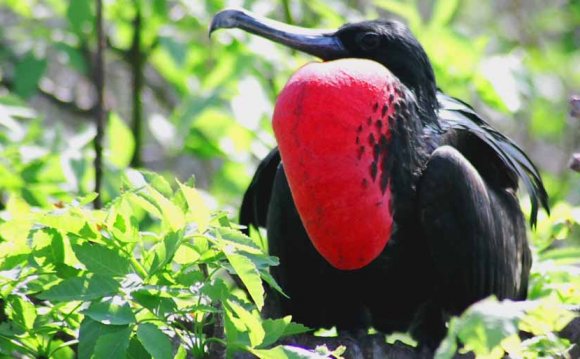 AM: North Seymour, Island was lifted from the ocean floor by a seismic event, and its origins as a seabed give the island its low, flat profile. Cliffs only a few meters high form the shoreline, where swallow-tailed gulls sit perched in ledges. A tiny forest of silver-grey Palo Santo trees stand just above the landing, usually without leaves, waiting for the rain to bring them into bloom.

This island is teaming with life! You might have to give way to a passing sea lion or marine iguana; blue-footed booby nests sit beside the trail where mating pairs perform their courtship dance. Further along, the rocky shore displays white sand, and large flocks of pelicans mass for a dive-bomb feeding frenzy, rendering a tableau for us from ages long past. The trail turns inland to reveal the largest nesting site in the Galapagos of the “magnificent frigate bird.” These huge, dark acrobats have two-meter wingspans, and males, with puffed up scarlet throat sacks, sit precariously perched in low bushes to watch over their equally large chicks. This is a walking excursion and involves un even rocky terrain. Dry landing.

PM: Las Bachas beach, a sandy white-coral beach that is a major egg-laying site for sea turtles. On the shore, there are many marine iguanas and in the lagoon, flamingos are commonly seen. This beach is also a good place for swimming and snorkeling. Best time for a walk along the beach or just relax and enjoy the magnificence Galapagos Islands. Wet landing

Today, we include two visitor sites: South Plaza and Punta Carrión, a perfect combination since aquatic activities are not allowed at South Plaza so we snorkel at Punta Carrión. On Tuesdays, we travel by land across Santa Cruz to the Itabaca Channel and snorkel at Punta Carrión in the morning, returning to Puerto Ayora and the hotel’s dock in the afternoon. On Fridays, we embark the yacht directly from the hotel’s dock in Puerto Ayora, but return by bus over Santa Cruz Island from the Itabaca Channel in the afternoon.

Punta Carrión, at the north-eastern tip of Santa Cruz Island, boasts both shallow reefs, mangroves, and exposure to rich upwellings to the east. As a result, it’s an ideal snorkelling site with plenty of reef fish as well as occasional sea lions and sharks.

South Plaza is a small island full of fascinating wildlife, both along its shore and along its dramatic, wind-swept cliffs: sea lions, land iguanas, swallow-tailed gulls, Opuntia cacti and vegetation that changes colours according to the season.

Our guides will seek out the best site along the cliffs for an enjoyable snorkel. Back on board, we continue sailing round the eastern coast of Santa Cruz until we reach a group of islets and rocks: South and North Plaza are twin, crescent-shaped islands. While the northern twin remains accessible only for scientists, South Plaza is one of Galápagos most impressive visiting sites.

Only 130 meters wide (426 feet), it was formed from uplifted seabed, giving it a tilted table top aspect. Our landing is in the channel between North and South Plaza, where the island slopes down toward the water. The approach makes for a lavishly colourful sight! The turquoise waters of the channel contrast brilliantly with the white sand and black lava of the shoreline. The rocks have grown thick with green seaweed in places, speckled with bright orange “Sally light foot” crabs. Further up the shore, a carpet of scarlet Sesuvium succulents serves as groundcover for a grove of luminescent green prickly-pear cactus. Yellow-grey land iguanas sit beneath these, waiting patiently for pears to drop.

The trail gradually follows the tilt of the island to the cliffs that overlook the ocean to the south, where swallow-tailed gulls nest. Red-billed tropic birds, masked and blue-footed boobies ride the gusty currents. The overlook is a great place for spotting large marine life, including manta rays. Surf pounds an inlet at the western corner of the island, where a colony of bachelor sea lions make their home, accounting for the surprising surface of the rocks, polished by the oils of their fur.

This is a walking excursion and involves uneven rocky terrain, Dry landing, Snorkelling.

Santa Fe offers one of the more beautiful and sheltered coves in the archipelago. Its turquoise lagoon is protected by a peninsula of tiny islets forming an ideal anchorage. The island lies to the southeast of Santa Cruz within sight of Puerto Ayora. Like North Seymour, Santa Fe has been uplifted, and you can see where underwater lava once cooled off (pillow lava). To get there, the Sea Lion Yacht departs from Academy Bay in Puerto Ayora, yards from the Finch Bay hotel’s dock.

A wet landing on a sandy white beach brings us into contact with one of the many sea lion harems. Bulls vie for the right to be Beach Master, while smaller males masquerade as females and make stealthy mating moves. Galápagos hawks are often easily approached, perched atop salt bushes.

The giant prickly pear cactus found here live up to their name, with tree-sized trunks! Our goal is to spot one of the large species of land iguana, native to Santa Fe. Beige to chocolate brown in colour with dragon-like spines, these huge iguanas truly resemble dinosaurs.

An indigenous species of rice rat also inhabits the thickets, and lucky hikers can spot harmless Galápagos snakes. After the hike, there is nothing more inviting than a swim in the calm waters of the bay, a great snorkelling opportunity with diverse marine life.

This is a walking excursion and involves uneven rocky terrain. The yacht both sails from, and returns to, the hotel’s dock in Puerto Ayora.

After an invigorating breakfast we leave the hotel, cross Academy Bay by boat, and board our bus in Puerto Ayora. In order to shorten travel distance and save considerable time (Bartolomé is the furthest island the hotel’s yacht visits), we will cross 42 km to the Itabaca Channel on the north shore, where the Sea Lion Yacht awaits us. This way, all that is left to sail is 21 Nautical miles (39Km/24miles) to Bartolomé Island.

Bartolomé is famous for Pinnacle Rock, a towering spearheaded obelisk that rises from the ocean’s edge and is the best known landmark in the islands.

Galápagos penguins —the only species of penguin found north of the equator — waddle precariously along narrow volcanic ledges at its base. Sea lions snooze on rocky platforms, ready to slide into the water to play with passing snorkelers. Just below the surface, shoals of tropical fish dodge in and out of the rocks past urchins, sea stars and anemones. A perfectly- crescent-shaped, pink-and-white sandy beach lies just to the east of the pinnacle. Sea turtles use the beach as a nesting site and can sometimes be found wading in the shallow water near the shore, or resting in the sand to recover from the arduous task of digging nests, laying eggs and covering them over. We snorkel from this beach following a wet landing.