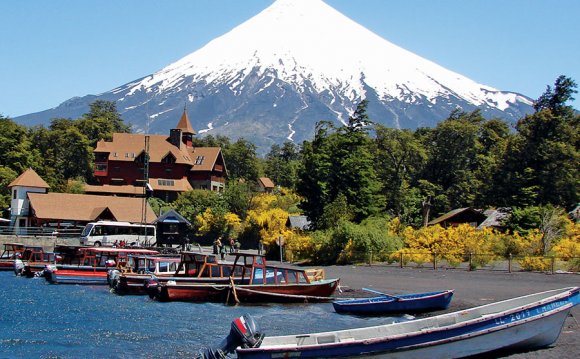 The Galápagos Islands comprise a mysterious landscape of wonder, beauty, and the most unusual wildlife found anywhere on Earth. Wake up to new vistas each day— cruising to six of the Galápagos Islands made famous by Charles Darwin, now a fascinating World Heritage site—and learn about it in depth from a highly qualified team of experts.

Fly to Quito, the highest capital city in the world at 9, 350 feet, and transfer to your deluxe hotel. Surrounded by snowcapped peaks, yet only miles from the Equator, Quito is known for its magnificent Spanish colonial architecture and lively street life.

Quito is a city of startling contrasts, where thousands of years of native South American tradition are interwoven with imported Catholicism, the Spanish language and European culture. Quaint family-owned shops and open-air markets are steps away from the ornate Spanish baroque-style cathedrals favored by the Conquistadors and the gleaming skyscrapers of today. On the city tour, visit the Golden Court and the noble, 16th-century Iglesia (Church) de San Francisco. Continue to the heart of Quito, a UNESCO World Heritage site, and see the Moorish-influenced Catedral Metropolitana and the Iglesia de La Compañía de Jesus, renowned for its lavish interiors decorated with an estimated seven tons of gold leaf.

This evening, attend a private Welcome Reception in the hotel. (B, R)

On this day you have a visit to the Museo Nacional del Banco Central’s Archaeological Gallery followed by an excursion to the Equator at zero degrees latitude, stand with one foot in each hemisphere in the “middle of the world, ” where an 18th-century multinational expedition located the Equator and established for the first time an accurate measurement of the earth’s size. Step inside the hundred-foot-tall monument to this endeavor and tour the Ethnographic Museum, illustrating the diversity of Ecuador’s indigenous peoples. (B)

Fly to the small Galápagos island of Baltra. Embark the M.V. Santa Cruz II in time for lunch and attend your first briefing by the English-speaking Ecuadorian naturalists.

Cruise along the Bolivar Channel, which offers stunning views of the volcanic peaks of Isabela and Fernandina. Spend the morning at seahorse-shaped Isabela Island, snorkeling in the waters off Punta Vicente Roca and searching the northern shores for the sea lions, penguins, and Blue-footed Boobies that inhabit the area.

Dominated by the sweeping slopes of La Cumbre Volcano, the moon-like landscapes of Fernandina Island are the habitat of one of the densest concentrations of wildlife in the Galápagos. During an afternoon visit, observe how recent volcanic activity has reshaped the island’s topography, creating an ever-changing environment for the island’s thriving populations of marine iguanas, cormorants and sea lions. (B, L, D)

Trace the west coast of Isabela, one of the younger islands, formed by six shield volcanoes, five of which remain active. Be on deck for possible sightings of orcas and dolphins breaching the waters of Tagus Cove. Take a short but steep hike to Darwin Lake, a saltwater pool within a tuff cone frequented by land birds—ground and tree finches, large-billed flycatchers, and sometimes the woodpecker finch, which awed Darwin with its remarkable use of twigs as a tool for feeding.

Observe the unusual results of geologic forces at Urbina Bay, where a 1954 volcanic uplift stranded nearly four miles of coral reef 15 to 20 feet above the water’s surface. On the arid shore you may encounter the largest land iguanas in the Galápagos as well as giant tortoises and flightless cormorants. Enjoy spectacular snorkeling in the bay. (B, L, D)

Santa Cruz Island’s pristine white beaches, prickly pear cacti, vibrantly colored flamingos and prehistoric-looking iguanas make it an essential stop during a cruise of the archipelago. Visit the Charles Darwin Research Station to learn more about efforts to protect the island’s rare giant tortoises. Its most famous resident until 2012 was an approximately 100-year-old tortoise known as “Lonesome George, ” thought to be the last member of a now extinct subspecies from Pinta Island.

Transfer to the island’s cool, lush highlands for lunch amidst mist-covered forests.

This afternoon, choose from a variety of activities at your leisure. Kayak in the clear blue waters of secluded Tortuga Bay, watching for black turtles, colorful reef fish, marine iguanas and lava gulls. Hike or mountain bike along the island’s trails or simply walk on the white sand beach. (B, L, D)

The island of Floreana was one of the first in the archipelago to be settled by European whalers and buccaneers. Walk along the brackish lagoons and mangroves near Punta Cormorant, famous for the flamingoes and pelicans that congregate here.