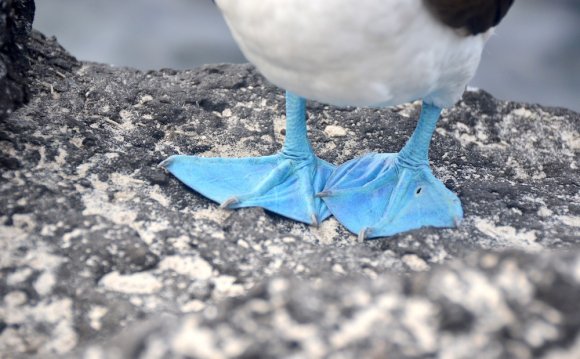 Undoubtedly the leader of the team, you can just imagine this friendly fella leading the pack. With its famous bark emanating from the middle of the huddle, fast on its belly and comfortable on land and in water (offense and defense), the Galapagos fur seal is a no-brainer for the quarterback position.

The runners. For this integral spot you need superhuman agility, so who better than the diving, twirling, dashing sea lion? Both the handy man of the team and the handy man of the islands, the sea lion can run, block, pass and receive. Heck, you throw in some fresh fishy bait and this guy will never stop chasing.

Fullbacks are powerful athletes. They’re the ones doing the hard slog up and down the field, blocking and protecting quarterback. For this you need a decent set of legs. Enter the flightless cormorant. Sure, it’s just a bird but due to it’s lack of, well, flight, they’ve evolved some ridiculously strong legs that propel them through ocean waters.

The strongest and mightiest of all receivers, this big guy is king of the block. That’s why we’re nominating the giant tortoise, king of the archipelago. With up to 250kg behind them, ain’t no one getting past this this tight end.

The inner two members of the defensive line, the defensive tackle are the only players on the ground permitted to use their hands against blockers. So, with a wingspan of up to 2.3 meters, the Great frigate bird was our number one choice. Plus, they’re adept at intercepting food from fellow flyers.

Weighing in at 45 very heavy tonnes, the humpback whale would make a master linebacker. Depending on formation, you could have a pod of up to three humpback tacklers on every play. I don’t know about you, but I wouldn’t want to face a barnacled whale on my way to touchdown.

Comfortable in deep water, these guys would inherently feel comfortable defending the deep pass (get it?!). And as the aggressive hunters of the sea, they’ll do a killer job as the last line of defense.

Speed, agility, catch. These tiny birds are known for hunting down their prey on foot, which has seen them draw similarities with a certain roadrunner. With four of these zippy Galapagos mockingbirds on your team, you’re going to be the fastest in the archipelago.

The general job of the defensive end is to tackle the quarterback or ball carrier. And the Galapagos hawk is pretty fierce in that regard, known for attacking goats, chickens and even the occasional baby seal. Not someone you wany to be up against.

This one’s obvious. Lightfoot equals light on feet. These little orange guys will be best utilized at the centre of play, handling the ball and never tiring.

While Intrepid can’t guarantee you’ll get to see a match featuring this all-star team (tickets sell out way in advance), you can see them all in their non-football capacity on one of our Galapagos voyages.