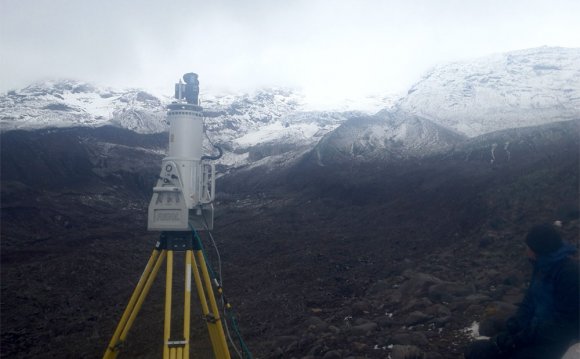 Chimborazo volcano is Ecuador's highest active volcano and the highest in the Northern Andean Volcanic Zone. The massive, ice-capped stratovolcano lies at the southwest end of the main Ecuadorian volcanic arc, the so-called "Avenida de los Volcanes" ("Avenue of Volcanoes") and is located ca. 150 km SSW of Quito and 28 km NW of the town of Riobamba.

Chimborazo had been thought to be extinct, but new studies have shown that it still is an active volcano. Although there are no historical eruptions,
Chimborazo erupted at least 7 times during the past 10, 000 years. These eruptions produced pyroclastic surges that reached down to 3800 m elevation. The average time interval between single eruptions is about 1000 years and the last eruption occurred about 1400 years ago, which means that statistically, it is due for another one.

Due to its great height and its geologic history of explosive eruptions, and closeness to populated areas in Ambato and Riobamba basins, it should be considered a dangerous volcano.

The dominantly andesitic-to-dacitic Chimborazo volcano is mostly of Pliocene-to-Pleistocene age. The volcano collapsed about 35, 000 years ago, producing a major debris avalanche, whose deposits underlie Riobamba and temporarily dammed the Río Chambo, producing an ephemeral lake.
Subsequent eruptions have been dominantly andesitic and constructed three edifices along an east-west line, the youngest and westernmost of which forms the current summit of Chimborazo.

Climbing Chimborazo
Chimborazo is a popular and challenging climb. The normal route up the mountain takes 10 hours to the summit and 4 hours to return.

Cycling in Ecuador with Chimborazo Volcano in the distance