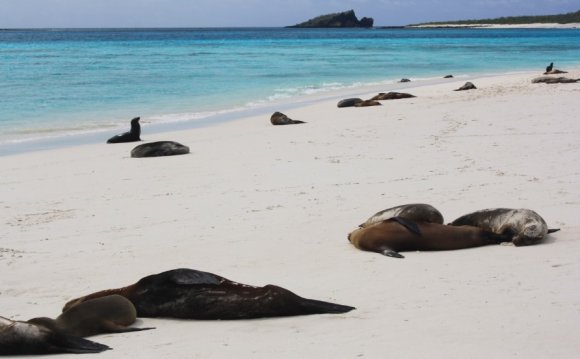 The unique underwater diving environment, the archipelago’s on-going geologic formation, and the role of the islands’ flora and fauna in understanding evolution and climatic influences are three of the reasons.

The fourth criterion is what draws thousands of visitors to the Galapagos Islands every year: its biological diversity. Many of these plants and animals are threatened by extinction.

The fauna includes giant tortoises, colorful land iguanas and the world’s only marine iguana. In all, Galapagos has 36 species of reptiles; all are endangered.

Galapagos also has 11 mammal species found nowhere else in the world. Of birdlife, these islands have the only penguin species found north of the equator, the flightless cormorant, and the two birds that helped Charles Darwin formulate his theory of evolution: Darwin Finches and the Galapagos mockingbirds.

The waters surrounding Galapagos have a rich diversity of marine life. Almost 20 percent of species are endemic to the area. During your tour, you can see many varieties of sharks, rays and other sea fauna.

It isn’t all easygoing in this Eden, however. In 2007, UNESCO put the Galapagos Islands on the list of threatened World Heritage Sites. The growth of human population and tourism has placed immense strains on the Galapagos’ environment. Due to measures the Ecuadorian government has taken, the Galapagos was removed from this endangered category in 2010.

One advantage of being a World Heritage Site is that UNESCO provides funding for equipment and studies necessary for the preservation of the reserve. Over the decades, Galapagos National Park and Charles Darwin Foundation have received over two dozen grants from UNESCO.

To visit the Galapagos or other UNESCO World Heritage Sites like Quito, contact one of the Galapagos Travel Center experts to arrange your trip.