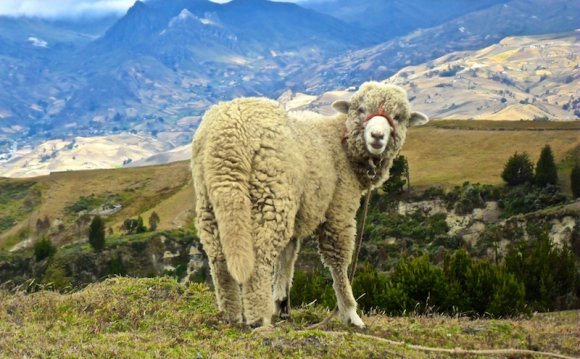 Best Things to do in Ecuador

Ecuador’s railways fell out of favour in the 1970s as the country’s inhabitants took the roads. However, train travel has been enjoying a renaissance since 2012, when a £183million project to reopen the country’s ancient railways was completed. The flagship service is Tren Crucero, a luxury tourist train that wends its way from the lofty capital, Quito, to the coastal city of Guayaquil via the infamous Devil’s Nose.

This tourist resort is booming despite having been several times evacuated because of its violent neighbour – the permanently erupting Tungurahua volcano. At night you can watch the mountain exhale fumes and lava, and during the day you can slip into one of the thermal baths, shower beneath a waterfall, take a hike or saddle up and ride through the forest.

Cotopaxi is one of the world's highest active volcanoes and is the perfect peak to start your climbing career. Previous experience is not necessary if you want to scale Cotopaxi’s ice-capped summit, but you need to be very fit and accustomed to high altitude. All ascents ought to be accompanied by an experienced, qualified guide.

Discover the lofty town of Zaruma

Hidden in the highlands of El Oro is this beautifully preserved colonial town that doubles as a mountain retreat. Perched on a hilltop at the heart of a pre-Hispanic gold mining area, it has steep twisting streets, painted wooden houses, a beautiful main plaza and Ecuador’s largest wooden church.

Scattered across a spectacular valley and surrounded by snow-capped volcanoes, Quito is one of South America’s best-preserved colonial cities. Its lavishly decorated 16th-century churches are full of exquisite religious art, while its plazas remember marching conquistadores, shackled slaves and Jesuits preaching to the Indians. It’s not all crumbling colonial facades, though: the hip New Town abounds with chic hotels, contemporary restaurants and cool bars.

The Pacific coast of Ecuador has sandy beaches and rolling surf that are a big draw for board riders. The village of Montañita has grown into something of a surfers' enclave with plenty of cheap accommodation and a lively nightlife. Mompiche in the north is also a superb place to catch a wave.

Go to the Galapagos Islands

Straddling the Equator, 1, 000km (622 miles) off mainland Ecuador, the Galapagos Islands famously helped inspire Charles Darwin's theory of evolution. Considered the most biodiverse place on Earth, this volcanic archipelago is home to a unique collection of wildlife including giant tortoises, iguanas, boobies, penguins, flamingos, sea lions, whales and sharks. The creatures are largely indifferent to humans, which means visitors can get up close and personal without them scurrying off. If you can, fork out for a cruise: it’s the best way to see Galapagos.

Haggle at an Indian market

Indigenous markets are an ethnologist's wonder, but also a cheap and efficient way to stock up on gifts for your friends and families. Otavalo is perhaps the most famous bazaar in Ecuador and its stalls sell anything from alpaca pashminas to wooden handicrafts. For a less touristy experience, head to the market in Saqisili, which offers an authentic slice of local life.

Kick back in Cuenca

Cuenca is a charming colonial city crammed full of heritage buildings, which have earned it a place on UNESCO’s World Heritage list. Wander down Cuenca’s cobblestone streets and discover an excellent archaeology museum, beautiful blue-domed cathedral, pretty plazas and countless whitewashed buildings with ironwork balconies. Nearby Ingapirca gives a glimpse of Ecuador's pre-colonial history; the country’s best-developed archaeological site, which dates back to pre-Inca times but was incorporated into an Inca site.

Quito is the Spanish language learning capital of South America, with a wealth of schools and classes set up to help you master the language, which locally is spoken softly and clearly. One-on-one and group tuition is available with personalised programmes drawn up to help speaking and communication skills in a short period of time. Check reviews and talk to other students to gauge the quality of the course and the academy in advance.

Marvel at the mounds of Cochasqui

North of Quito stand the most elaborate pre-Inca mounds and monuments in the country; 15 truncated clay pyramids, nine of which have long ramps attached. Covered by earth and grass they vanished from view but several have been subsequently uncovered and excavated to show how they were built.

Trains rattling along the so-called Devil’s Nose pull off the seemingly impossible task of scaling a mountain, making this one of the world’s most impressive railway journeys. Zigzagging through switchbacks and skirting along track inches from a rocky precipice, trains flirt with the edge as they navigate this perilous route, which takes passengers from the jungle to the lofty Andes above. A must do if you’re visiting Ecuador.

A huge granite monument marks the equator just north of Quito – the only problem is that this massive marker is in the wrong place. The nearby Inti Nan museum claims to sit on the true equator, where guides show you how water swirls clockwise and anti-clockwise on either side of the line, plus various other tricks.

Subject yourself to a good thrashing

The traditional healers of San Francisco Market in Quito offer cures for various afflictions, ranging from anxiety to nightmares. Treatments differ, but most involve being thrashed with nettles, which is thought to help patients gain control of their feelings. If the healers aren’t sure what’s wrong with you, they may give you an x-ray… using a dead guinea pig.

Tackle the white water at Tena

Famous for its rainforest and the rivers that flow through it, Tena is a beautiful place from which to discover the Amazon. It is, however, whitewater rafting that Tena is most famous for, with some of the best runs in the world available to tackle nearby. Sign up with a licensed agency and paddle down stunning stretches of river before riding grade 3-4+ rapids, depending on the route and river.

Take a hike in the Andes

High-altitude walks in the Cotopaxi and El Cajas national parks require some serious stamina due to the lack of oxygen, but if you can brave the altitude they offer the chance to see the stunning scenery of the grass-covered paramo plateaus, surrounded by volcanoes.

20 BEST THINGS TO DO IN LOS ANGELES ♥ Top Attractions LA ...

Top 10 Best Things to Do Eat and See in Singapore Travel ...

Best Things to Do in Havana, Cuba