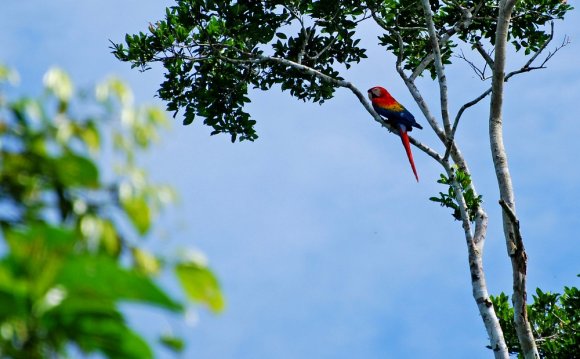 Fun Things to Do in Ecuador

I did the tour with River People in Tena and that day we were quite many tourists as there was a group of high school students among us. We left Tena in a few taxis and I was happy that I got a seat inside the pickup truck and not outside. At the starting point we got instructions and equipment. As the rain poured down, making it colder, we were provided with wetsuits and jackets. On the river we were four rafts from River People and two rafts from Ríos Ecuador, and two safety kayaks. In our raft we were six people and one guide.

The water level was high and there were lots of big waves making the ride very fun. Some people fell in, others jumped in on purpose
After halftime we stopped for lunch. While the lunch was prepared we played games on the beach to keep warm. The lunch was well organized and very good; tacos with guacamole, beans, rice cheese and some salad. There were also fruits and chocolate cake. Yummy!

The tour ended soon after Jatunyaku had joined Río Anzu, in Puerto Napo. We had been rafting altogether around four hours (not including the lunch).

It is possible to bring a camera in a waterproof bag, but cloths and bags are left in one of the cars. In Puerto Napo there is a changing room so you can change to your dry clothes.

Rafting in Jondachi/Hollin (class 4)
The rafting in Jondachi/Hollin is class 4, which means that it is more technical than Jatunyacu which we had visited the previous day. We did not know until the morning we went on the tour if we could go or not as there had been intensive rain the whole day when we went rafting on Jatunyacu. If the water level is too high in Jondachi/Hiollin it is more dangerous and they don’t do the tour. Luckily it had not rained during the night and we could go.

To go to the starting point we drove north from Tena to Mondayacu where we turned right on to a small dirt road. From where the car stops there is a hike down to the river. People from the village arrived because they were hired to carry the equipment. We wore our helmets and life vests and carried a paddle each, but the rest was carried by the village people.

Before starting the rafting we walked to a hidden canyon with a small waterfall and a deep pool. It was a very beautiful place. Some people made a 10 metres jump into the pool. I didn’t, but afterwards I regret it: I have never jumped into the water from that height and this would have been a great place to do it a first time.

This day we were six tourists and the guide Tim in a raft, a safety kayak and Tim’s sister guiding two tourists in kayaks. The landscape along the rivers is stunning with lush jungle vegetation in a canyon and some waterfalls coming from the sides. We could also see different butterflies and birds. And the weather was nice, some sun and clouds, but no rain.

Where the Jondachi joins Hollin we stopped for lunch. For lunch we got pasta, potatoes, avocado and salad. And as the previous day there were chocolate cake and fruits. It was a lunch that tasted very good after being on the river a couple of hours.

After lunch we continued. During the tour no one fell out of the raft, but at two places where there was less turbulence we all jumped in to drift with the stream.

If you only have time for one rafting tour I really recommends Jondachi/Hollin. It is more fun and challenging as it is more technical and the landscape is stunning.

The rafting tour to Jondachi/Hollin was $70 (August 2013). We all paid $65 though as this was our second rafting tour with River People.

Fun Things To Do In Skyrim!

Fun things to do with your Hamster!