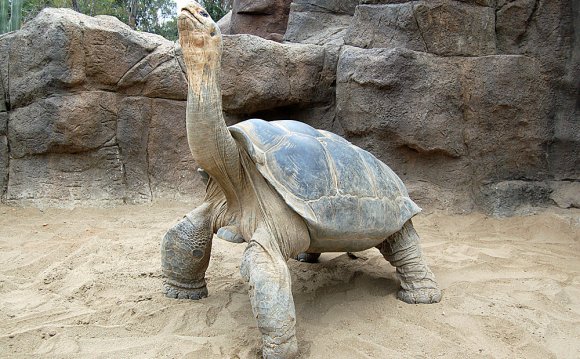 Who discovered the Galapagos Islands?

A new species of giant tortoise, Chelonoidis donfaustoi, has been discovered on Ecuador’s Galápagos Islands. UBC biology professor Michael Russello was on the team of international scientists who identified this species. Photo credit: James P. Gibbs

An international team of scientists has discovered there are actually two species of giant tortoises living on Santa Cruz Island in the centre of the Galápagos Archipelago.

Until now, it was assumed that the two giant tortoise populations on the island were of the same species, just living on different sides of it.

The new species, only found on the eastern side of Santa Cruz Island and occupying an area currently estimated at about 40 km2 (one-tenth of the island’s size) has been called the Eastern Santa Cruz Tortoise (Chelonoidis donfaustoi).

“The naming of this new species will increase efforts to protect and restore the Eastern Santa Cruz Tortoise, ” said Caccone. “Its low numbers, limited geographic range, and reduced genetic diversity make it vulnerable. As a newly recognized species, it will now receive the attention needed to ensure its survival.”

Over the centuries, giant tortoises were devastated throughout the Galápagos Islands due to human exploitation, introduced species, and habitat degradation. The Giant Tortoise Restoration Initiative, a collaborative project of the Galápagos National Park Directorate, Galápagos Conservancy, and international scientists, is focused on the long-term restoration of all Galápagos tortoise populations to historical numbers. Special emphasis will now be placed on the Eastern Santa Cruz Tortoise.

10 of the MOST AMAZING SEA CREATURES ever discovered!