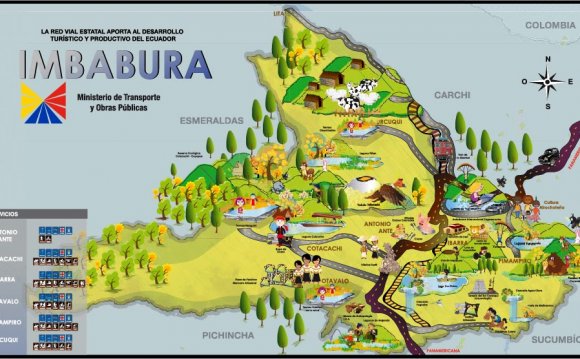 Ecuador Tourism - Ecuador is the smallest country in the rugged Andean highlands, Ecuador is among the most rewarding travel destinations in South America. With its array of vibrant indigenous cultures, well preserved colonial architecture, otherworldly volcanic landscapes and dense rainforest, it packs its perimeters with more points of interest than many countries twice its size. You can swim with nature, rafting, trekking climb volcanoes, and humpback whale watching. Bahia de Caraquez

- The capital of Ecuador is arguably the most beautiful city in South America. Quito is the capital of Ecuador and of Pichincha, the country's most populous Andean province, is situated 116 miles from the Pacific coast at an altitude of 9, 350 feet, just south of the equator. It has a pleasant climate that can be described as "permanent spring". The city, one of the oldest in South America, is built in a small basin on the lower slopes of Cerro Pichincha. It was the capital of the ancient kingdom of Quitu and for several decades, prior to its occupation by Spaniards in 1534, was a second (northern) capital of the Inca empire. The city official name as given by the Spaniards, is Villa de San Francisco de Quito, it is Ecuador's second largest city. It is the political, administrative, and cultural capital of Ecuador.

Quito, more than any other South American capital, has preserved its colonial atmosphere, with squares, fountains, public buildings, and houses built in the typical Spanish style. Most attractive is the main square, Plaza Mayor, with its seventeenth-century cathedral, government palaces, municipal hall, and other buildings. Quito is well known for its many small workshops producing native arts and for its outdoor Indian markets.

Guayaquil: . Others include Rumicucho, near Quito; La Tolita, near Esmeraldas; and Tomebamba in Cuenca (most of the ruins in this old provincial capital have been built over, but some can be seen at Avenida Todos Santos). The ancient Valdivia culture (dating from 3200 BC) left remains at Real Alto, San Isidro (excavated mounds) and Santa Elena—all of which are located in the coastal area northwest of Guayaquil. Santa Elena is notable for having the world's oldest known cemetery (dating from 5000 BC). Inside Machalilla National Park is the Agua Blanca site. (Artifacts from most of these places are best seen in museums in Guayaquil and Quito.

Ambato, Ecuador - This modern city (pop. 140, 000) south of Quito was rebuilt following a 1949 earthquake—little evidence of the colonial era remains. Ambato, however, is a good place to buy Salasaca Amerindian tapestries and other handicrafts (Monday is the main market day, with smaller ones on Wednesday and Friday). Sights include the Quinta de Mera (historic home), the local museum and the relaxing Parque Juan Montalvo (named after the Ecuadorian political essayist). The city hosts the Fruit and Flower Festival during the last two weeks of February (fruits, flowers, bullfights, street dances and festivities). Visitors can take excursions to Chimborazo (at 20, 700 ft/6, 310 m, it's Ecuador's highest peak); the Fauna Production Reserve (15, 000 acres of native flowers and plants); and nearby town of Banos. Ambato is 75 mi south of Quito.

Baños, Ecuador - Is located in the middle of a mountainous region = It is a place for relaxation while exploring the Andean Highlands. It is very well know for its natural springs. There are many locations that can accommodate a good long dip. The lovely scenery around Banos is the area's other main attraction, and there are several ways to enjoy it. Good hiking trails, horse back riding and even riding a bike in the mountains. White-water boating is also possible in the area. Please have these all pre-arranged by your travel agents. "It's a Must"

Cuenca, Ecuador - Panama hats are the trademark of Cuenca, Ecuador's third-largest city. Panama hats were first made in the Cuenca area and are still produced there. The city still maintains is Andean Small town aura. In town you can immediately sense and feel what it was living 100 years ago. The year round spring like climate is a tremendous draw to Cuenca. The town has an Old World, Spanish colonial feel—flower boxes on windows, wrought-iron balconies, red-tile roofs, cobblestone streets and a lively market (open Thursday, with a smaller market on Saturday). It's also a center for arts and crafts—many of the things sold in Quito and Guayaquil come from this area. Among the sights are several cathedrals and convents. Home of the original Panama hat.