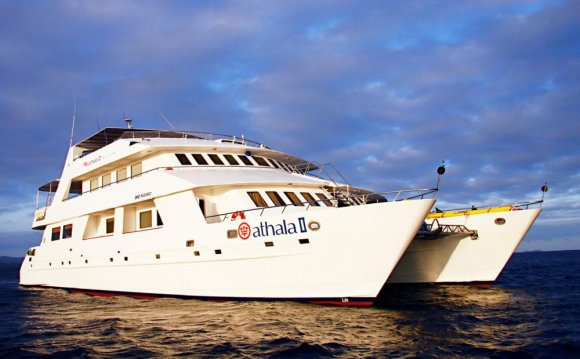 Metropolitan Touring's 90-passenger MV Santa Cruz spends the year cruising Ecuador's famous Galapagos Islands via four- and five-night voyages. The expedition cruise ship was custom-built for Metropolitan in 1979 and reconstructed in 1998. It also undergoes regular refreshes (with updates to carpeting, wall paper, upholstery, etc.), the last of which occurred in fall 2011.

Here's what passengers can expect to find on a MV Santa Cruz cruise to the Galapagos:

Cruise fare: what's included. The cost of the cruise includes excursions (island treks, snorkeling, kayaking, etc.), all meals and snacks, lectures and snorkeling equipment (masks, fins, snorkel). Three-millimeter "shortie" wetsuits, which are recommended during the June/July to December cool season, can be rented onboard. Wi-Fi, which is available in the ship's lounge and library, and sodas/adult beverages are also extra.

Expedition essentials. Passengers cruise with one expedition leader and five naturalist guides, including an "underwater naturalist, " a specialist who leads the snorkeling activities. Other expedition-friendly tools found on Santa Cruz include a hydrophone for listening to the calls of dolphins and whales, sit-on-top sea kayaks, a glass-bottom boat (an alternative to snorkeling) and five "pangas, " the ubiquitous water taxis that facilitate ship-to-shore transportation.

A doctor is also stationed permanently onboard should passengers run into any minor issues with the equatorial sun, wasps or seasickness.

Dining. Breakfast, lunch and dinner are served open seating at designated times in the ship's restaurant. Breakfast and lunch are offered buffet-style while dinner is served course-by-course. The occasional meal is also served alfresco on a top-ship (covered) secondary venue. Post-excursion snacks (juice and mini-empanadas, say) are offered daily.

Public spaces. The social hub of the ship is the combination bar-lecture room, which is used for evening briefings, video presentations and as a destination before-and-after dinner drinks. Next door, a small library houses a pair of Web-ready computers and a collection of books about South America, the Galapagos and wildlife. (Wi-Fi is available in the library and bar/lecture room.) Downstairs, the lobby features a boutique selling logo hats, shirts and jackets, as well as a variety of travel essentials for forgetful passengers (sun block, aloe, sunglasses).

The ship's sun deck features a smattering of wicker loungers and a jacuzzi with room to comfortably accommodate six passengers. Additionally, there's an observation area on the ship's stern.

The Galapagos' version of the United Nations. Santa Cruz, which carries nearly double the capacity of its fleetmates, La Pinta and Isabella II, attracts the line's most international passenger base. Multiple languages are spoken by the naturalist guides and crew.