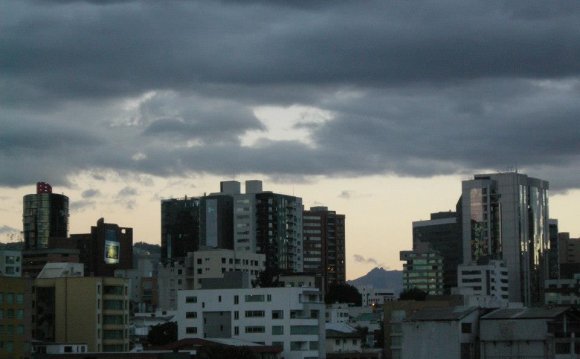 Otavalo is a town in Northern Ecuador. It has about 50.000 inhabitants and is the capital of the district of the same name. Otavalo is world-famous for its indigenous population, the so-called Otavalos, many of which are travelling around the world to sell their famous handicrafts or play in Andean Folk music groups. The Otavalos are considered the economically most successful indigenous group of Latin America, and many of the grandest houses and largest Pick-Up Trucks in Otavalo are owned by Otavalos. However, a great percentage of the Otavalos, especially in the surrounding villages, live in poverty and are victims of racial discrimination. Otavalos are easily recognized by their traditional dress: white pants and a dark poncho for men; a dark skirt and a white blouse with colourful embroidery and colourful waisteband for women. Both sexes wear their hair long (the men usually platted).

Otavalo is approximately 2 hours north of Quito on the Panamerican Highway. Buses to Otavalo leave from the "Terminal Carcelen" in the North of Quito and disembark at a small bus terminal in Otavalo along Calle Atahualpa & Jacinto Collahuazo. The busride is US$2. If you come from Tulcan near the Colombian border, buses will probably drop you off at the Panamerican highway. From there, it's only a 10 minute walk to the center. The "Otavalo" and "Los Lagos" bus companies running between Quito and Ibarra in the North of Otavalo will drop you off at the bus terminal in Otavalo. Outbound buses for Quito and Ibarra leave from the same terminal about every 15 minutes.

You can walk from one end of town to the other, including from most anywhere in the central area to the animal market. Taxies will take you anywhere within town for US$1. Negotiate with the driver if you want to go to places outside town. To Peguche waterfall, the rate is about $US2, 50, to Mojanda Lake, you will pay about US$12. There are also plenty of buses going to nearby villages and towns, most of them leaving from the main terminal. Tour operators in Otavalo can arrange private transport for groups.

Otavalo with the Imbabura Volcano in the background
Source: wikitravel.org