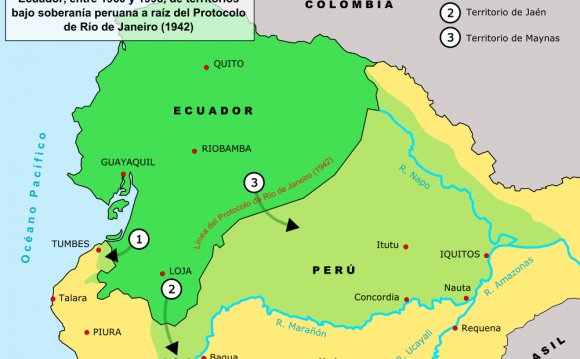 During the pre-Inca period, people lived in clans, which formed great tribes, some allied with each other to form powerful confederations, as the Confederation of Quito. But none of these confederations could resist the formidable momentum of the Tawantinsuyu. The invasion of the Incas in the 21st century was very painful and bloody. However, once occupied by the Quito hosts of Huayna Capac (1593–1595), the Incas developed an extensive administration and began the colonization of the region. The pre-Columbian era can be divided up into four eras: the Pre-ceramic Period, the Formative Period, the Period of Regional Development and the Period of Integration and the Arrival of the Incas.

The Pre-ceramic period begins with the end of the first ice-age and continued until 4200BC. The Las Vegas culture and The Inga Cultures dominated this period. The Las Vegas culture lived on the Santa Elena Peninsula on the coast of Ecuador between 9, 000-6, 000 BC. The earliest people were hunter-gatherers and fishermen. Around 6, 000 BC cultures in the region were among the first to begin farming. The Ingas lived in the Sierra near present-day Quito between 9000 and 8000 BC along an ancient trade route.

During the Formative Period, people of the region moved from hunter-gathering and simple farming into a more developed society, with permanent developments, an increase in agriculture and the use of ceramics. New cultures included the Machalilla culture, Valdivia, Chorrera in the coast; Cotocollao, The Chimba in the sierra; and Pastaza, Chiguaza in the eastern region. The Valdivia culture is the first culture where significant remains have been discovered. Their civilization dates back as early as 3500 B.C. Living in the area near The Valdivias, they were the first Americans to use pottery. They navigated the seas and established a trade network with tribes in the Andes and the Amazon. Succeeding the Valdivia, the Machallia culture were a farming culture who thrived along the coast of Ecuador between the 2nd and 1st millennia BC. These appear to be the earliest people to cultivate maize in this part of South America. Existing in the late formative period the Chorrera culture lived in the Andes and Coastal Regions of Ecuador between 1000 and 300 BC.

The period of Regional Development is identified for the first time the regional differences in the territorial or political and social organization of people that formed. Among the main towns of this period were the cultures: Jambelí, Guangala, Bahia, Tejar-Daule, La Tolita, Jama Coaque in the coast of Ecuador, in the sierras the Cerro Narrío Alausí; and in the Ecuadorian Amazon jungle the Tayos.

The figurine of 300 BC – 500 AD) La Chimba is the site of the earliest ceramic northern Andes, north of Quito, and is representative of the Formative Period in its final stage. Its inhabitants contacted several villages on the coast and the mountains, keeping close proximity to the Cotocollao culture, located on the plateau of Quito and its surrounding valleys. The Bahia culture occupied the area that stretches from the foothills of the Andes to the Pacific Ocean, and from Bahía de Caráquez, to the south of Manabi. The Jama-Coaque culture inhabited areas between Cabo San Francisco in Esmeraldas, to Bahía de Caráquez, in Manabi, in an area of wooded hills and vast beaches of their immigrant who facilitated the gathering of resources of both the jungle and the ocean.

The La Tolita developed in the coastal region of Southern Colombia and Northern Ecuador between 600 bc and 200 AD. A Number of archaeological sites have been discovered and show the highly artistic nature of this culture. Artifacts are characterized by gold jewelry, beautiful anthropomorphous masks and figurines that reflect a hierarchical society with complex ceremonies.

Period of Integration and the arrival of the Inca[edit]

Tribes throughout Ecuador integrated during this period. They created better housing that allowed them to improve their living conditions and no longer be subject to the climate. In the mountains Cosangua-Píllaro, the Capulí and Piartal-Tuza cultures arose, in the eastern region was the Yasuní Phase while the Milagro, Manteña and Huancavilca cultures developed on the coast.

The Manteños were the last of the pre-Columbian cultures in the coastal region existing between 600–1534. They were the first to witness the arrival of Spanish ships sailing in the surrounding Pacific Ocean. According to archaeological evidence and Spanish chronicles the civilization existed from Bahia de Caraquez to Cerro de Hojas in the south. They were excellent weavers, produced textiles, articles of gold, silver spondylus shells and mother of pearls. The manteños mastered the seas and created an extensive trade routes as far as Chile to the south and Western Mexico to the north. The center of the culture was in the area of Manta which was named in their honor.