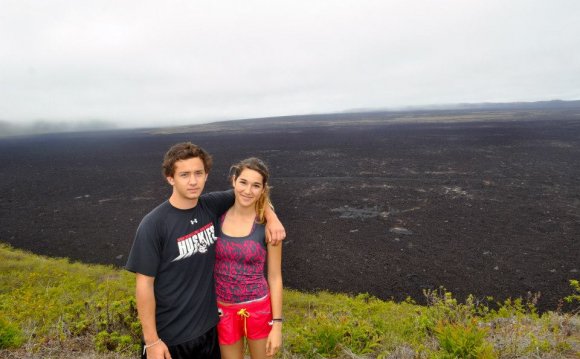 Where else in the world can you frolic with sea lions, creep up on hulking giant tortoises and witness the salty snort of a marine iguana?

As the birthplace of Charles Darwin's theory of evolution, scientific history was made on the Galapagos Islands. Today these protected islands are a haven for wildlife and a utopia for nature-lovers. Because humans have rarely posed a threat to the animals of the Galapagos Islands, they have virtually no fear and are delightfully nonchalant about the presence of boats and swimmers. For this reason, the islands are some of the only places in the world where you can get this close to wild animals.

However, animal encounters are not the only memories you'll take home with you. The Galapagos Islands have a history to uncover and a stark volcanic landscape ringed with ice-white sand and lapped by chilly, brilliant blue water.

Here are just some of the experiences you'll never forget from a trip to the Galapagos Islands:

The whiskery sea lions of the Galapagos Islands are curious creatures that will swim right up to snorkellers, openly examining the new arrival, before teasingly diving under and over in a swift loop around their newfound playmates. The rule of the islands is not to approach animals unless they come to you, but that is rarely an issue with the inquisitive sea lions.

2. Sailing alongside a spyhopping killer whale

Galapagos expert Jen Richt was lucky enough to witness an incredible sight from her Panga boat on a cruise around the islands: a killer whale (or orca) spyhopping right next to the boat. Whales and dolphins spyhop (poke their heads and upper bodies out of the water) to get a view of the world above the surface.

"The surprise of seeing a killer whale slide vertically up from the ocean by our Panga boat to suss us out was the most exhilarating, spine-tingling experience of my Galapagos trip." -

On the sandy shores of Floreana Island is a strange sight: an odd collection of wind-blasted barrels and scrawled signs. This is Post Office Bay, where whalers, stuck at sea for years at a time, would leave messages for family and loved ones to be picked up by ships on their way home. Today people still leave letters, so have a rummage and see if there are any that you can hand-deliver.

Giant tortoises are only found in two places on Earth: the Seychelles and the Galapagos Islands. You know you've been in the Galapagos for a while when you start regarding a field of these prehistoric animals much as you would a herd of cows at home. The ancient-looking reptiles can grow to over a metre long and can weigh up to 300 kilograms, due to what is known as 'island gigantism' where isolated species can grow to enormous sizes in comparison to their mainland counterparts. Discover more about giant tortoises at the Charles Darwin Research Station.

5. Being snorted at by a marine iguana

Found only on the Galapagos Islands, prickly marine iguanas can be found clustered together on the rocks, catching rays to warm the cold blood that runs beneath their black, leathery skin. The dragon-like creatures are usually tolerant enough to let you sit nearby for an iguana selfie, but if you get too close, you may find yourself covered in a spray of salt forcefully snorted out of the iguanas salt glands. The purpose of this charming act is to rid the lizards of excess salt caused by their high-sodium diet.

6. Diving with the sharks

Hundreds of sharks live in the waters surrounding the Galapagos Islands, but fear not: due to the healthy fish population, there has never been an attack on a human. That's why the dive sites around the islands are the perfect places to dive amongst the placid reef sharks and hammerheads that patrol this marine reserve.

The Galapagos Islands have a population of over 25, 000, so although the nightlife might not quite match that of Quito, there are a few bars in which you can mingle with the locals, learn a few salsa steps and sample the type of caipirinhas that will put hairs on your chest. Take a wander down Avenida Charles Darwin in Puerto Ayora on Santa Cruz where you will find popular bars such as the Bongo Bar and Limón y Café.

8. Snorkelling with turtles and rays

You don't need to dive to witness the wealth of wildlife that reside under the surface of the sea around the islands. Strap on a snorkel, just in and swim with languid green sea turtles and cruising rays. The temperature of the water doesn't quite match its tropical hue, so you might need a wetsuit.

9. Visiting the most northerly penguins in the world

Not only are the Galapagos penguins the most northerly, they are also the second smallest penguins in the world. These little flightless birds might look clumsy pottering around on the rocks, but as soon as they get in the water they become like tiny bullets, whipping past unwieldy snorkellers at lightening speed.

The blue-footed booby is one of the Galapagos Islands' most iconic species, identified by their - you guessed it - bright blue feet. A male's feet are highly lusted after and they use them to attract females by strutting around and taking exaggerated high steps; the bluer the booby's feet, the more attractive the male.

11. Clambering to the top of the Sierra Negra volcano

Although most views of the Galapagos Islands will be at sea level, it's worth heading to a higher vantage point for an alternative landscape. The Sierra Negra volcano is located on Isabela Island, the largest Galapagos island, and reaches an altitude of 1, 124 metres. You can either hike or ride a horse along the black and red lava fields and around the expansive crater at the summit.

12. Getting creeped out by the Wall of Tears

The Wall of Tears (or El Muro de las Lágrimas) is a bizarre relic of the Galapagos' past. Located on Isabela, this 25-metre-tall stone wall, which stands quite by itself in the middle of nowhere, was constructed between 1945 and 1959 by convicts when the island was a penal colony. Seemingly built for no reason at all, the process of building the wall was said to have caused thousands of deaths as the starving, sickly prisoners were forced to work through the heat of the day. Locals say the wall has a strong, ominous aura and emits strange cries.

13. Watching 'the locals' steal from the fish market

Around the fish market on Santa Cruz Island ballsy pelicans hover, waiting to snap up a fish head or two, stowing it in their Mary Poppins bag of a throat pouch. Sea lions play a less aggressive game by flopping around looking sorrowful; even when they do manage to grab a morsel, the pelicans are quick to snatch it off the lumbering mammals. The fishmongers are wise to all the antics though, as you'll see in the video.

"Although the islands are most famous for the animals, it's wonderful to watch them interact with the human communities and see how closely intertwined the wildlife and the humans are." -

Islands of the Galapagos - Cusco