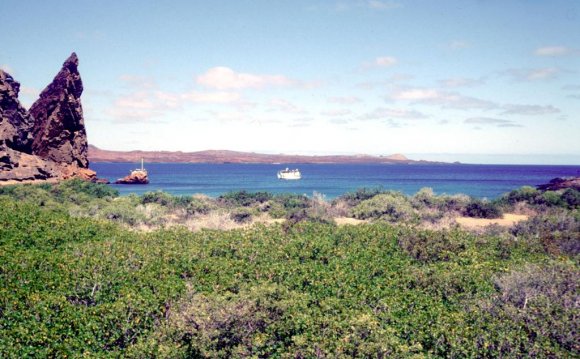 This is an image showing part of Isla Isabella in the western Galapagos Islands. It was taken by the L-band radar in HH polarization from the Spaceborne Imaging Radar C/X-Band Synthetic Aperture Radar on the 40th orbit of the space shuttle Endeavour. The image is centered at about 0.5 degree south latitude and 91 degrees west longitude and covers an area of 75 by 60 kilometers (47 by 37 miles). The radar incidence angle at the center of the image is about 20 degrees.

The western Galapagos Islands, which lie about 1, 200 kilometers (750 miles) west of Ecuador in the eastern Pacific, have six active volcanoes similar to the volcanoes found in Hawaii. Since the time of Charles Darwin's visit to the area in 1835, there have been over 60 recorded eruptions of these volcanoes. This SIR-C/X-SAR image of Alcedo and Sierra Negra volcanoes shows the rougher lava flows as bright features, while ash deposits and smooth pahoehoe lava flows appear dark. A small portion of Isla Fernandina is visible in the extreme upper left corner of the image.

The Galapagos Islands are one of the SIR-C/X-SAR supersites and data of this area will be taken several times during the flight to allow scientists to conduct topographic change studies and to search for different lava flow types, ash deposits and fault lines.

Spaceborne Imaging Radar-C and X-Synthetic Aperture Radar (SIR-C/X-SAR) is part of NASA's Mission to Planet Earth. The radars illuminate Earth with microwaves allowing detailed observations at any time, regardless of weather or sunlight conditions. SIR-C/X-SAR uses three microwave wavelengths: L-band (24 cm), C-band (6 cm) and X-band (3 cm). The multi-frequency data will be used by the international scientific community to better understand the global environment and how it is changing. The SIR-C/X-SAR data, complemented by aircraft and ground studies, will give scientists clearer insights into those environmental changes which are caused by nature and those changes which are induced by human activity. SIR-C was developed by NASA's Jet Propulsion Laboratory. X-SAR was developed by the Dornier and Alenia Spazio companies for the German space agency, Deutsche Agentur fuer Raumfahrtangelegenheiten (DARA), and the Italian space agency, Agenzia Spaziale Italiana (ASI).

Hancock-Pacific Galapagos Expedition: The Empress of the ...

New Images Show the Magma Underneath a Galapagos Volcano