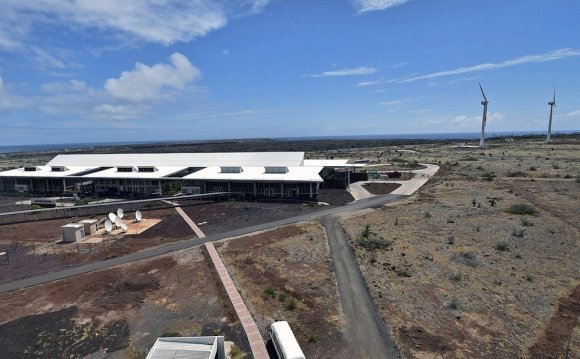 Galapagos Ecological Airport – Endemic plants are dotted around the entrance of the 64, 000-square-foot building, which required a $40 million investment and was built using sustainable construction.

Galapagos Ecological Airport – The airport features photovoltaic panels that have been installed to provide 35% of the building's energy: the remaining 65% comes from windmills on the site.

Galapagos Ecological Airport – These mechanical shutters have sensors that are used to manage the temperature and CO2 levels inside the airport.

Galapagos Ecological Airport – Even the furniture at Galapagos has been certified green - they were acquired from responsible sources while other pieces of wood and metal were recycled from the previous terminal.

Boston Logan Airport – Before Galapagos got the gold, there was Boston Logan. As the first airport to receive any kind of LEED certification, this US airport has stepped up its use of wind turbines, solar panels and other renewable sources since 2012. Now, officials at the airport have announced plans to curb energy consumption, cut carbon emissions and protect runways from rising sea levels.

Zurich Airport – Swathes of land around the uber-modern Zurich airport have been claimed as nature conservation areas to protect the region's plant life. Several unique species of flora and fauna reside in the surrounding area.

East Midlands Airport – Two 148-foot wind turbines were installed at East Midlands Airport in 2011, and the move was considered to be a first for an airport in the UK. The airport ensured all ground operations were carbon neutral in 2012, while also managing a nearby willow farm that can produce bio-fuel.