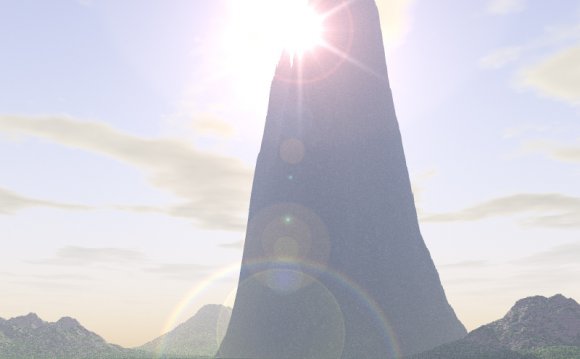 In a recent article we asked how tall mountains can get, concluding that Mount Everest was formed under such unique circumstances that, at 30, 000 feet, it's probably as tall and as high a mountain as has ever existed. But not everyone would agree with that. It all depends on how – and where – you make your measurements.

The Peak of Mauna Kea in Hawaii

The extinct volcano Mauna Kea in Hawaii is one of several known peaks which you could quite easily argue are taller than Everest, and probably the best candidate for its crown - as long as you're willing to award it on a technicality.

Certainly, the highest point of Mauna Kea is definitely not higher than Everest's. At 4, 205 metres (13, 796 ft) above sea level, it's less than half as high as Everest. So why is it such a good challenger for the accolade of tallest mountain? It all hinges on those three simple words: 'above sea level'.

If you discard the water that surrounds Mauna Kea and measure the mountain from its base – a measurement called the 'dry prominence' – Mauna Kea is taller than Everest by almost 500 metres. Starting at the point where Mauna Kea begins to rise out of the surrounding crust, the mountain has a total height of around 9, 330 metres (30, 610 ft). Since no part of Everest is submerged, its dry prominence is the same as its height above sea level. If you could place them side-by-side, on a flat plane, Mauna Kea would indisputably be the taller of the two.

There are several factors that enable Mauna Kea to be taller than a mountain formed above sea level, but the main reasons are to do with the crust beneath it. Oceanic crust is denser than continental crust and therefore less prone to sag.

It's also a lot thinner than continental crust, so its own weight isn't as much of a factor as it is above ground.

By comparison, Everest is the heavy weight of a mountain sitting on top of the already heavy weight of continental crust, which is 25-70km thick compared to the 7-10km of oceanic crust. Since water is much less dense than rock, the oceanic crust is carrying less weight beneath sea level than the continental crust beneath Mount Everest. It can therefore support higher prominences than would be possible above sea level.

To put it another way, if you were to measure the total height of both mountains starting from the bottom of the crust beneath them, Mauna Kea would be taller than Everest – it's just that it's inconvenient for us to make that measurement because we only have access to the top.

Olympus Mons as photographed by Viking in 2000

If Mauna Kea is only taller than Everest on a technicality, then maybe Olympus Mons has a better claim to the title. Also an extinct volcano, Olympus Mons is around three times the height of Mount Everest and there's absolutely no sea water around the base to muddy the definition of where we start measuring its height. But if you're a budding mountaineer looking for a challenge, you might have to wait some time until you try and climb it, because there's one small problem: Olympus Mons is located on Mars.

A Mountain Higher than Everest?

Mountain Climbing skills "No height is taller than your will"

A Mountain on Earth Taller Than The Mt. Everest