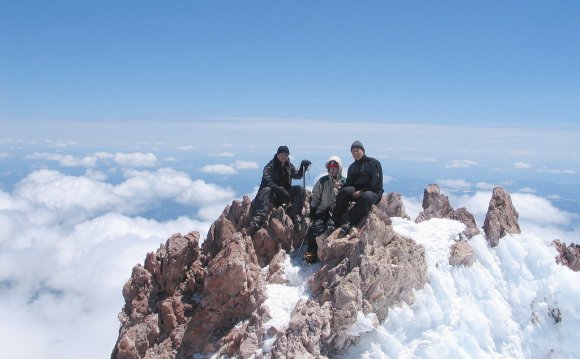 When Hillary and Norgay climbed to the top of Everest they wore oxygen tanks. Because Everest is so high it juts into the upper reaches of the earth's atmosphere, where there are much lower concentrations of oxygen than at sea level. What that means to folks trekking up the side of Everest is that their bodies get less oxygen from each breath they breathe while climbing. But their brains and muscles require the same amount of oxygen to perform as they would at sea level. That makes it especially tough to climb Everest.

Try to imagine what it feels like to climb up a mountain with very little oxygen in your body - you get dizzy, your nose, fingers and feet get numb and tingly, your heart thunders in your chest trying furiously to keep up with the muscles' demand for oxygen. You feel sleepy, confused, downright stupid as your brain struggles to function on limited oxygen. Every step you take is extremely slow and plodding, requiring every ounce of will you have. Hillary and Norgay had extra oxygen to help them make the trip, but there have been a few people who have made the trip since who did it without the aid of oxygen - taking one step about every five minutes! Approximately 6, 000 climbers have attempted the summit of Everest, but only 2, 249 have made it. Over 200 people have died trying and of those, at least 120 bodies are still missing on the mountain.

Mount Everest is just one of over 30 peaks in the Himalayas that are over 24, 000 ft/7315m high. Himalaya is a Sanskrit word meaning, "abode of snow", which is so true. The name of the mountain in Nepal is Sagarmatha, which means "goddess of the sky". The snowfields which dominate many of the peaks in the Himalayas are permanent. Yes, they never melt (not even in the summer). That means there are glaciers in the Himalayas - lots of them. Mount Everest is permanently covered in a layer of ice, topped with snow. The "top" of the mountain at which the elevation was measured can vary as much as twenty feet or more, depending on how much snow has fallen on its peak. Scientists believe that the actual tip of the rock lies tens of feet below the ice and snow on its summit.

There are current plans to use ground penetrating radar to get a reading of the actual height of the mountain beneath all that snow. Although the Himalayan Range is only 1, 550 miles/2480km long, the average height of all the major peaks in the Himalayas easily makes it the highest mountain range on land.

The Birth of a Mountain

Mountains aren't just big piles of dirt, they're made of solid rock. Believe it or not, the rocks that make up the Himalayan mountains used to be an ancient sea floor. Over millions of years, rivers washed rocks and soil from existing mountains on the Indian subcontinent and nearby Asia into a shallow sea where the sediment was deposited on the floor. Layer upon layer of sediment built up over millions of years until the pressure and weight of the overlying sediment caused the stuff way down deep to turn into rock. Then about 40 million years ago, in a process called "uplifting", the sea floor began to be forced upward forming mountains.

Top 10 Highest Mountains in the World

Highest Mountain in the World-everest mountain