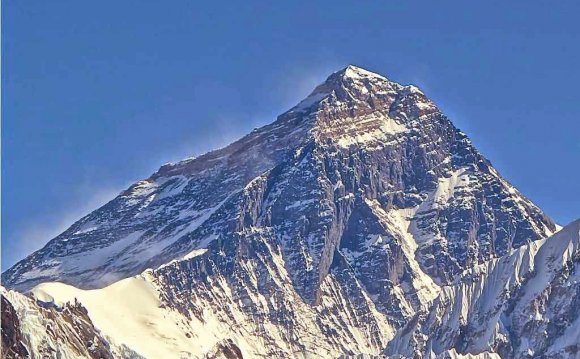 Reaching 29, 029 feet (8, 848 meters) above sea level, Mount Everest is the highest mountain on Earth. Located in the Mahalangur section of the Himalayas, the mountain's summit straddles the border separating China and Nepal.

The mountain's height was first determined in 1856. The Great Trigonometric Survey of British India pegged the mountain, known to them as Peak XV, at 29, 002 feet (8, 840 meters). But those surveyors were at a disadvantage because Nepal would not grant them entry due to concerns that the country would be invaded or annexed. The current accepted elevation was determined by an Indian survey in 1955 and backed up by a 1975 Chinese measurement.

In 1865, Andrew Waugh, the British Surveyor General of India, suggested that the mountain be named after his predecessor in the job, Sir George Everest. The Tibetans had referred to the mountain as "Chomolungma, " or Holy Mother, for centuries, but Waugh did not know this because Nepal and Tibet were closed to outsiders.

Mount Everest attracts experienced mountaineers as well as less-seasoned climbers who typically enlist guides known as sherpas. Climbing more than 8, 000 feet is no easy feat. Altitude sickness, weather and wind are the major roadblocks to making the summit for most climbers. More than 5, 000 people have climbed Everest and 219 have died trying. About 77 percent of those ascents have been accomplished since 2000. In 2007, a record number of 633 ascents were recorded.

The northern approach was discovered in 1921 by George Mallory during the British Reconnaissance Expedition, which was an exploratory expedition, not intended to attempt the summit. Mallory was famously, perhaps apocryphally, quoted as answering the question "Why do you want to climb Mount Everest?" with the reply "Because it's there."

In 1922, Brit George Finch attempted an ascent using oxygen for the first time, but the expedition was thwarted by an avalanche.

In June 1924, Mallory and Andrew Irvine did not survive their attempt to reach to the summit. A 1999 expedition found Mallory's body.

Early expeditions in the 1920s and 1930s attempted to make the ascent from the Tibetan side but access was closed after Tibet came under Chinese control in 1950. This spurred Bill Tilman and a small party that included Charles Houston, Oscar Houston and Betsy Cowles, to approach Everest through Nepal along the route that has developed into the standard approach to Everest from the south.

In 1952, members of a Swiss expedition led by Edouard Wyss-Dunant, were able to reach a height of about 28, 199 feet (8, 595 meters) on the southeast ridge, setting a new climbing altitude record. Tenzing Norgay, a member of this expedition and a Nepali sherpa, took part in the British expedition the following year.

In 1953, a British expedition led by John Hunt, returned to Nepal. Hunt selected two climbing pairs to attempt to reach the summit. The first pair (Tom Bourdillon and Charles Evans) came within 300 feet (100 meters) of the summit but were turned back due to oxygen problems. Two days later, the second pair, Edmund Hillary and Tenzing Norgay, reached the summit, took some pictures and left some sweets and a cross.

Those higher altitudes cannot support animal life or vegetation; however, birch, juniper, blue pines, firs, bamboo and rhododendron grow in the lower areas. There are no plants above 18, 690 feet (5, 750 meters).

Other milestones among Mount Everest expeditions include:

Kim Ann Zimmermann is a contributor to Live Science. She holds a bachelor’s degree in communications from Glassboro State College.