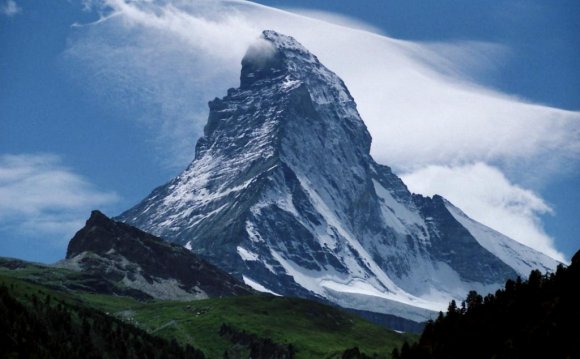 In the USA you will get two answers for terrestrial mountains. The non-climber or US climber answer is given as Denali (Mt McKinley) as a 20K ft. mountain on a surrounding plain of about 3K ft. a rise of nearly 17K ft. However, few start at 3 K. ft. (most fly or start at higher base camps).

Knowledgeable US climbers know that Nanga Parbat, a mountain few Americans have ever heard of, which is also on a 3K ft. plain, goes up to 26K ft, a rise of about 23K ft but in particular the Rupal flank or face is about 17K ft. of technical climbing or so. Most ascents go up other sides like the original route done by Buhl or the Diamir flank.

Post question movement modification: Chimborazo (the locals don't use the Mount, that's an English word) is probably the point furthest from the center of the Earth's geoid. Small local variants like covered by Gangwal and Singh. Theirs are fine answers for a different question. The citation of Mauna Kea (been there a couple times including sleeping on top) is fine relative to base providing you remove the ocean. Everest is high relative to sea-level, because among other things, far few people would stand on up without using supplemental oxygen.

Most Extreme Places on Earth HD 2015