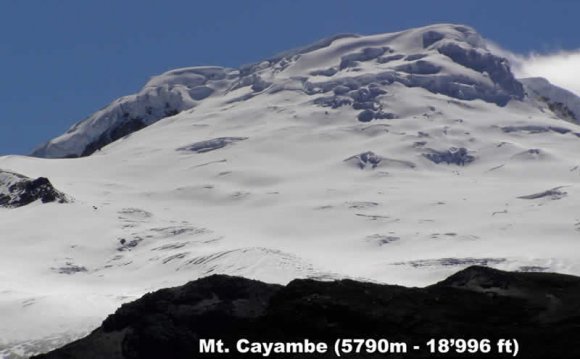 Where the last blog left off I was commenting on my intent to summit the tallest peak in Ecuador, Volcano Chimborazo, at a height of 6300 meters. The climb happened...although not necessarily with the result I had imagined.

Looking back, it seems like I was due for a reckoning during this trip. I had cruised smoothly through Panama, Colombia, and parts of Ecuador. I was meeting people, seeing amazing sights, but not really ever being seriously challenged by anything I came across. Attempting to climb Chimborazo changed all that.

On a Wednesday morning I walked into a local guide agency to try to find out how to climb the mountain. Our conversation went something like this:

Me: Buenos dias! I´d like to find out about how to climb Chimborazo.(in Spanish)

Employee: Okay, what kind of hike do you want.

At that, the two people behind the desk sat up a little straighter. One of them, a young guy, introduced himself to me as Franklin Barca. I didn´t know this at the time, but Franklin and I were about to get to know each other very well.

Franklin, age 28, was an alpine guide and medical student studying emergency mountain medicine. He had been guiding for four years, climbed several of the tallest peaks in the Andes, including the tallest (Aconagua, at 6, 800 meters, in Argentina), and had summited Chimborazo over 40 times.

There in the office we talked a little bit about what I had in mind, and we decided on a practice hike that Friday, followed by a hike to the summit on Saturday night.

We spent almost the entire next 3 days together. On Thursday, we went and checked out equipment, and on Friday we took a trip up to the mountain for a practice hike up to 5, 300 meters.

Something I really didn´t have clear in head as all these planning steps took place, was that climbing Chimborazo was serious mountaineering. We would be trekking upwards through ice and snow, and into very thin air with the summit at an altitude of over 20, 000 feet. We would be wearing heavy mountaineering boots with crampons, thick snow clothing, a harness, helmet, head lantern, and I would be carrying a heavy snow pick throughout the hike.

The seriousness of what I was about to attempt dawned on me following our practice hike on Friday. We took a public bus up to the entrance to the park, walked about 6 kilometers up to the refuge at 4800 meters where we would begin the summit hike, and then after a short break, continued on a point above the refuge around 5300 meters where the snow starts to cover the landscape.

The hike from the refuge to 5300 meters left me doubled over, gasping for air every 50 meters towards the end. And once we´d reached our goal, I looked up at the mountain still towering above us, covered in snow with wind whipping around its sides, and for the first time felt strong pings of self doubt. Would I be able to do this?

I spent that night alone in my hotel room, trying to steel my nerves and insist to myself that everything would be fine; that maybe, the mountain is not really as challenging as it looked. I decided I would not look up at the summit during the hike, as it only served to make me more anxious.

The next day, at around 4pm Franklin and I were transported in truck by the guiding agency up to the first refuge at 4800 meters. There our planned schedule was to eat ¨dinner¨ at 4:30pm, rest from 5 to 10pm, wake up for ¨breakfast¨ at 10pm, suit up afterwards, and then begin our hike at 11pm at night.

I did not know this prior to preparing for this hike, but the summiting of most high peaks is done at night...or at least the majority of the ascent. The weather conditions are generally calmer at night, with less wind and snow. Due to our timing, we would also have the benefit of a near-full moon.

So at approximately 11:15pm, having eaten a light breakfast and put on all our gear, Franklin and I opened the door to the refuge and set foot outside to begin our ascent.

I felt great. I was rested, had a light meal in my stomach, already pretty well acclimated to the altitude due to the practice hike and our pre-hike rest, and felt comfortable with all my equipment. Aside from that, we would be hiking in near-perfect conditions. There was almost no wind, very little cloud cover, and the bright moon above us gave us excellent visibility, almost making our head lanterns unnecessary.

We made excellent time during the first hour and fifteen minutes, making it up all the way to 5300 meters, around where we´d finished the practice hike. At that point, we point on our metal crampons, helmets, and Franklin tied me into him, preparing to enter the ice and snow that would define the rest of the hike.