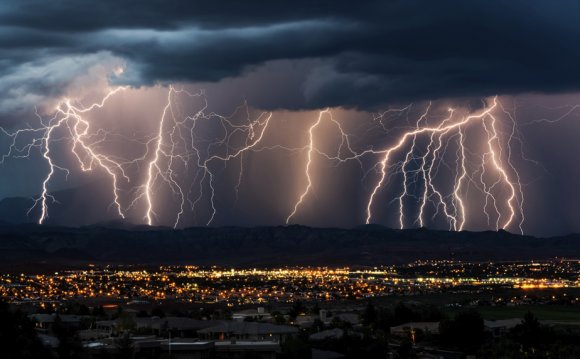 This fascinating infographic on Earth’s highest and lowest points – and the information below – comes from Chiltern Thrust Bore in the UK. On the page where this graphic was originally posted, they added more detail:

Nepal is home Mount Everest, the Earth’s highest point – and to put into perspective just how high it stands, consider that commercial aeroplanes fly at a height of 30, 000 – 35, 000 ft.

Every year, hundreds of adventurers attempt the dangerous feat of reaching the summit of the world’s highest mountain. Although more than 4, 000 people have conquered the mountain since Sir Edmund and Sherpa Tenzing Norgay first reached the summit in 1953, around 250 people have died in the attempt.

Known as the ‘death zone’ after 26, 000 ft above sea level, oxygen levels are insufficient to sustain human life. That’s why mountain climbers must carry oxygen tanks with them when they climb high peaks like Mount Everest.

The world’s highest active volcano is located in the Andes on the Argentina-Chile border. The most recent eruption occurred around 1300 years ago, however there is also some evidence of a minor ash emission in 1993.

La Rinconada is the world’s highest city, located in Peru, and is a destination for only the most valiant. With few tourists and no hotel, La Rinconada is an isolated town for the 50, 000 people who live there.

La Rinconada started as a gold-mining camp in a remote location, that has grown to ‘major’ city status, and stayed there. Workers in the local gold mine work for 30 days without payment, and on the 31st day they are allowed to take as much ore from the mine as they can carry. Whatever the miners are able to extract from the ore is theirs.

However, with no plumbing, sanitation or heating, La Rinconada is hard place to live. Learn more about this fascinating city here.

Mount Fuji is one of the most famous mountains in the world, and is a composite cone (stratovolcano) formed by violent volcanic eruptions. The symbol of Japan, Mount Fuji is a popular tourist site with more than 200, 000 people climbing to the summit every year.

Ben Nevis is the highest mountain in the British Isles, located in the Lochaber area of Scotland. It’s actually the remains of an ancient volcano which imploded millions of years ago.

An observatory and hotel were built at the summit in the 1880s, but was deserted after 20 years due to lack of funding. Their ruins can still be seen today.

Located in Dubai, the Burj Khalifa is the tallest building and free-standing structure in the world, with 160 stories.

The Shard is currently the tallest building in the European Union. Standing proudly next to the famous London Bridge in London, UK – The Shard is a “Vertical City” with multiple and different occupiers; restaurants, offices, residencies and even a hotel with 202 rooms.

Mount Everest Is Not The Tallest Mountain On Earth + 9 ...

The Tallest Mountains on Planet Earth, by PROFESSOR MANJIT ...