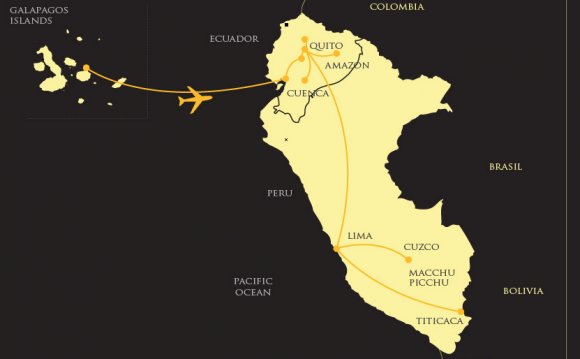 Quasar Expeditions is far more than just a leader in Galapagos cruises. We are proud to offer Ecuador tours in the smallest country in the rugged Andean highlands. We invite you to Explore Ecuador on our regional tours for the ultimate South American adventure!

Extending your stay for even a short time with our Ecuador tours will render rich rewards in a country that is home to thriving indigenous cultures, Spanish Colonial haciendas, the spectacular Andean mountain range and the western edge of the Amazon basin! The Ecuadorian highlands are a land of eternal spring, where near vertical terraced green pastures rise toward the snowcapped peaks of the famed Avenue of the Volcanoes. On our Ecuador tours you can venture into a cloud forest to marvel at an unparalleled variety of hummingbirds, watch the flight of a condor from horseback while riding high on an Andean ridge, bargain for quality handcrafts at the oldest and largest indigenous market in the Andes, and then retire to the welcoming hospitality (with a fireplace) of a 400 year old hacienda and its gardens…or how about soaking beneath the southern stars in the soothing waters of a natural hot spring? And all this is in the countryside just outside the capital of Quito. The colonial section of Quito is a UNESCO World Heritage site offering fine examples of en architecture from the 16th to the 18th centuries including the golden interior of La Compañia church. Read more below about the options available in each region.

Venturing south along the Avenue of the Volcanoes on our Ecuador tours, takes one into the heart of the central Andes past some of the highest peaks in the Americas. This is a journey that includes mountain spas, smoking volcanoes and ancient Incan temples; culminating in the romantic colonial city of Cuenca crossed by four rivers. Walking Cuenca’s cobblestone streets or watching the people go by in its tropical town square before the great cathedral is both peaceful and inspiring.

On our Ecuador tours we also offer some of the finest habitat and lodges anywhere in the Amazon basin. Combining a trip into the Amazon with the Galapagos is considered one of the top wildlife safaris in the western hemisphere. Imagine watching fur sea lions in the Galapagos and giant otters in the Amazon all on the same trip! Along the way you will find that you are a welcome guest and made to feel as a friend in this land along the equator that the locals call the Center of the Earth.

Peru is a living marvel and a mystery that was the heart of the famous Incan Empire that once extended northward from Peru into Ecuador. You will marvel at the towering Andean Cordilleras, or mountain corridors, that rise up like giant fortress walls from the deep Peruvian river valleys. You will also marvel at the extent of the massive earthworks left by the Incas, from stone paved processionals over the Andes to tunnels, temples and mountain citadels.

Mystery is inherent in the landscape of this region. how did the Inca erect megaliths that equal and surpass any found in Europe? Why would they carve an entire hillside into the shape of a condor, and how did they form a mountaintop into the head of a jaguar using colossal stones that would challenge any modern crane? As you venture into the Sacred Valley of the Inca the mystery of the landscape merges with the human mystery of spirit as you notice the Inca have carved large natural stones along the trails to mirror the distant mountain ranges they look out upon. You are left in a constant state of awe that seems to sharpen the mind and heighten the senses until it climaxes when you see Machu Picchu from the Gate of the Sun with your own eyes against the towering stone sentinel of Wayna Picchu.

The proud descendants of the Inca still make their home in this magical land, often living in the same places and honoring a way of life similar to their ancestors. At the end of each day you will have a full range of accommodations available, from 5 star hotels found in fine examples of en Colonial architecture to camping along the Inca Trail, and many levels in between

The wonders of Peru extend toward Bolivia to Lake Titicaca. Here we find the city of Puno, founded in the late 17th century following the discovery of nearby silver mines. Puno hugs the shores of fabled Lake Titicaca, the world's highest navigable body of water, a sterling expanse of deep blue at 3, 830m (12, 566 ft.) above sea level. The magnificent lake straddles the border of Peru and Bolivia and offers incredible attractions to modern day visitors, including the famous floating islands of the Uros people.

The Peruvian Amazon is the fourth largest expanse of tropical rainforest in the world, and home to thousands of unique animal species as well as many indigenous tribes speaking dozens of languages. Some of the last groups of people living with little or no direct contact with the outside world can still be found in the Peruvian Amazon today.