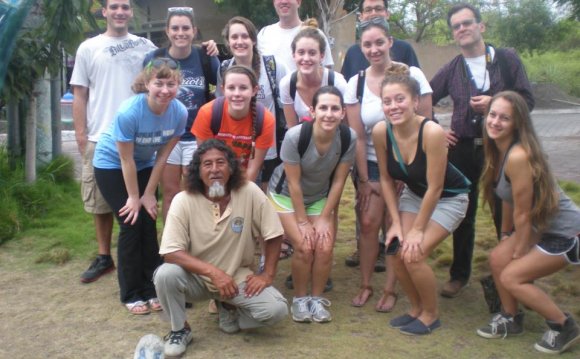 In Galapagos culture women are generally responsible for the care of children and housework.

Most of the men work as Fishermen which has always been an important source of income for Galapagos families.

This activity is done on small boats and could be called sustainable. But since 1970 is becoming more and more an important source of income to these Islands.

In general costumes are very similar to the ones practiced in mainland Ecuador, people is very warm, friendly and always willing to help visitors.

The population in Galapagos is around 18, 000 Men and love to play soccer and even more this year 2006 when the Ecuadorian National soccer team participated in the Soccer World Cup in Germany, achieving a great success.

Ecuavolley is also a very common sport, it is a Volleyball game but it is played a bit different to traditional volleyball. The ball is a soccer ball and there are only three players per team.

Galapagos culture is a mixture between the people that came from the highlands, the Amazon Jungle and the coast of Ecuador.

The are only four populated Islands in Galapagos: Santa Cruz, Isabela, Floreana, and San Cristobal.

Puerto Ayora is the most important town. It is located on and has around 4, 000 inhabitants.

The Galapagos National Park and the Charles Darwin Research Station are located here.

The Galapagos Islands were annexed to Ecuador in 1832 and colonized. The English names of the islands were changed for Spanish names.

became a penal colony, as well as Isabela Island.

One of the common stories tells that prisoners were forced to build a nonsense wall with rocks, this wall is still preserved and was named the Wall of Tears.

One of the most lucrative activities and which is and important part in Galapagos culture and is the collection of Sea Cucumbers (Pepino de Mar in Spanish) mostly in the Islands of Isabela and Fernandina.

Sea Cucumbers are invertebrates that have a high demand in Asia because they are supposed to be aphrodisiacs.

People from Asia are always willing to pay enormous amounts of money for Galapagos sea cucumbers.

The marine reserve in the Galapagos Islands has an extension of 130, 000 km2 becoming the second marine protected area in the world.

The first one is the Great Barrier Reef National Park of Australia.

One of the main services of the National Park is to give environmental education to locals and visitors regarding the unique ecology of the Archipelago.

To preserve the natural resources of the Islands has also become a part of the culture in Galapagos.

Foreigners have also contributed to Galapagos culture, a lot of them have discovered in Galapagos their little piece of heaven.

Most of them come from the United States and Europe and have acquired ships or travel companies to offer tours and different services to visitors which are nearly 180, 000 a year.