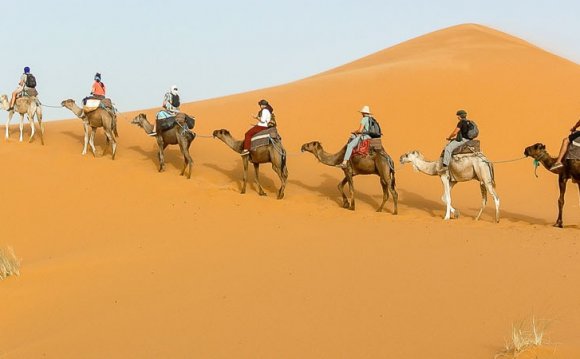 The Galapagos Islands are made up of 13 major islands and six smaller islands, from San Cristobal in the east, home of the Galapagos provincial capital Puerto Baquerizo Moreno, to Isabela Island, the largest island in the Galapagos group.

At around one million years old, it is one of the younger islands of the Galapagos consisting of several intermittently active volcanoes, one of which is Volcan Wolf, the highest point in the Galapagos at 1707 metres (5600 feet). The island was formed by six shield volcanoes (large volcanoes with gently slopping sides) called Wolf, Cerro Azul, Darwin, Alcedo, Sierra Negra and Ecuador. With the exception of Ecuador, all of these volcanoes are still active today making Isabela Island one of the most volcanically active places on the planet.

It's also one of the most interesting in terms of flora and fauna. Due to its youth, Isabela Island does not have the same vegetation zones as the other islands, and still has vast lava fields and arid volcanic peaks. It's home to the largest population of wild tortoises in the islands including several distinct sub-species, along with an array of birdlife including the Galapagos penguin, flightless cormorants and pink flamingo.

Puerto Villamil is the main port for Isabela Island, with around 1200 inhabitants. It's one of the most beautiful settings in the Galapagos with long white sand beaches and lines of palm trees. From here you can visit a number of lagoons which are home to pink flamingos, common stilts and white-cheeked pintails. It is also the home of the Charles Darwin tortoise breeding centre.

San Cristobal is the easternmost island in the Galapagos and is home to the provincial capital Puerto Baquerizo Moreno and the main airport. It is the fifth-largest island with a area of 558-sq-kms (215-sq-miles), and the capital has a population of around 5400.

The town of Puerto Baquerizo Moreno was originally used as a penal colony over a hundred years ago and is now a sleepy coastal village where most people start and finish their adventures in the Galapagos Islands. It has a small museum of natural history and a relatively new interpretation centre with information on the biology and history of the Galapagos Islands.

There are also a number of renowned dive and snorkel spots off the island's coast including Kicker Rock and Isla Lobos. Isla Lobos is home to the area's main sea lion and blue-footed booby colonies and you can snorkel with curious sea lions as they swim and play in the shallow water. Kicker Rock, or León Dormido (sleeping lion) as it's known in Spanish, is a sheer-walled tuff cone (steep-sided formation created by magma water eruptions) located about 1-2 hours by boat from Puerto Baquerizo Moreno. It is a great spot for bird watching, with blue-footed boobies, frigates and tropicbirds, and below the water's surface, the crystal clear depths offer divers and snorkelers a brilliant show of vibrant tropical fish, wrasses, starfish, angelfish, stingrays and turtles.

Santa Cruz is the second largest island in the Galapagos and is the hub for most of the tourist activity in the area. The main town is Puerto Ayora, home of the famous harbour Academy Bay. Academy Bay was named by the California Academy of Sciences Expedition in 1905 when they travelled to the area to study the flora and fauna of the Galapagos Islands. It is also the site of the Charles Darwin Research Station. The Research Centre houses a baby-tortoise enclosure where you can see hatchlings and young tortoises. You can also walk into the adult tortoise enclosure to meet the gentle Galapagos giants face to face.

About an hour's walk west from Puerto Ayora is one of the most beautiful beaches in the Galapagos Islands, called Tortuga Bay. Here you'll find very fine white-sand beach and a spit of land which provides sheltered area for swimming. There are sharks, marine iguanas and a variety of waterbirds - including pelicans and the occasional flamingo.

Other attractions of this island include paths through arid-zone vegetation, such as salt bush, mangroves and prickly pear and other cacti, as well as interesting highland cloud forests and hollowed out lava tubes.

This is one of the smaller of the Galapagos Islands with an area of 24-sq-km (9-sq-miles). It's located about 20km (12.5 miles) southeast of Santa Cruz and is a popular destination for day trips. Here you can see Santa Fe land iguanas if you're lucky - this species of iguana can be found nowhere else in the world. Other creatures include the endemic rice rat, marine iguanas, a sea lion colony and of course, lots of birds.

The island of Santa Fe was created by a volcanic uplift, rather than an eruption giving the island a relatively flat surface instead of the typical conical shape.

Baltra Island, also known as South Seymour Island, is a small island off the north coast of Santa Cruz. There is an airport but no visitor sites or accommodation here. This is where many tours start from, with people being met at the airport and taken to their boats. Baltra airport was constructed during World War II by the U.S. military to protect the Panama Canal from enemy attack. During this period in history, much of the wildlife on the island was exterminated and only recently have land iguanas been reintroduced and can be seen near the airport.