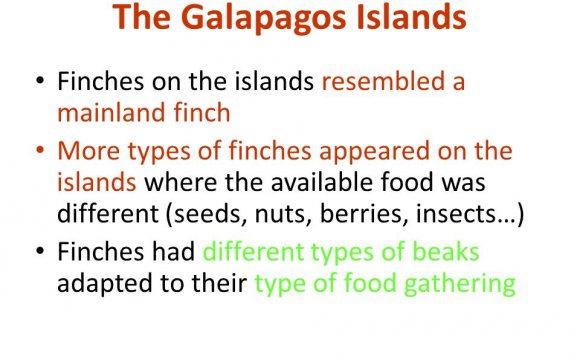 Darwin's theory of evolution explains how species of living things have changed over geological time. The theory is supported by evidence from fossils, and by the rapid changes that can be seen to occur in microorganisms such as antibiotic-resistant bacteria. Many species have become extinct in the past and the extinction of species continues to happen.

Charles Darwin was an English naturalist. He studied variation in plants and animals during a five-year voyage around the world in the 19th century. He explained his ideas about evolution in a book called On the Origin of Species, which was published in 1859.

Darwin's ideas caused a lot of controversy, and this continues to this day, because the ideas can be seen as conflicting with religious views about the creation of the world and creatures in it.

Darwin studied the wildlife on the Galápagos Islands - a group of islands on the equator almost 1, 000 kilometres west of Ecuador. He noticed that the finches - songbirds - on the different islands there were fundamentally similar to each other, but showed wide variations in their size, beaks and claws from island to island. For example, their beaks were different depending on the local food source. Darwin concluded that, because the islands are so distant from the mainland, the finches that had arrived there in the past had changed over time.

Darwin studied hundreds more animal and plant species. After nearly 30 years of research, in 1858 he proposed his theory of evolution by natural selection.