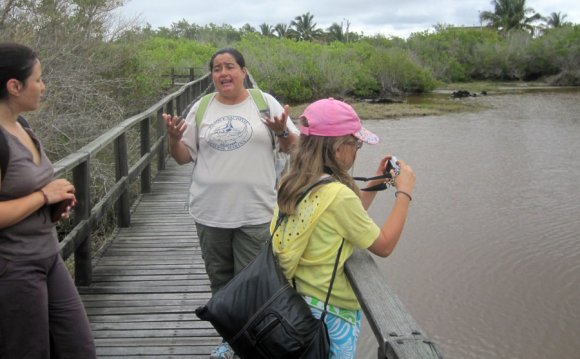 Drew Haines is a young Canadian expat living in Ecuador. She writes the Galapagos for Kids series on Red Mangrove Blog. Learn about the Galapagos from a kids perspective.

There are Giants in the Galapagos!

What came to your mind when you read the title? Dragons? Well unless you are thinking of marine iguanas, dragons don’t live in Galapagos … but maybe you would find one in a castle :). You probably didn’t think of turtles. But the fact is that the Galapagos Tortoises are giants.

They can grow up to 4 ft. (1.2 m) long! I think there scientific name is funny: Geochelone elephantopus. The second word reminds me of an elephant. Maybe they call it that because of the elephant-like toenails and the funny floppy neck?

Did you know … about Galapagos Tortoises?

Warning: Just because they are called saddleback, doesn’t mean you can ride them – so don’t. At the Charles Darwin Foundation, you used to be able to go in the enclosures but you can’t now. That’s because people were riding the tortoises and it hurt them.