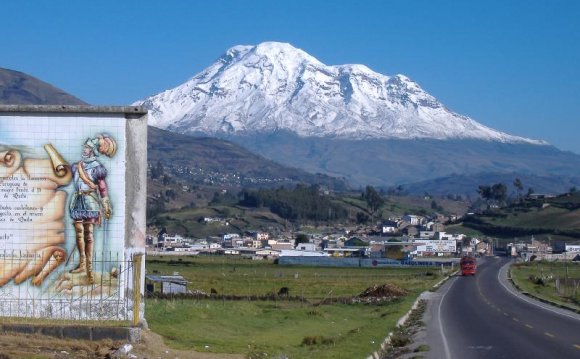 If there’s one thing everyone knows about mountains—and given the state of geography education today, that may be a pretty accurate estimate—it’s that Mount Everest, in the Himalayas, is the Earth’s highest point. But what if it wasn’t? What if Everest, with its famous 29, 029-foot peak, was actually dwarfed by a mountain you’ve probably never even heard of, an Ecuadorian volcano called Chimborazo?

Mount Chimborazo is an Andean stratovolcano in central Ecuador, looming so impressively over the country that, on a clear day, you can see it all the way from the large port city of Guayaquil, 90 miles away. Chimborazo is Ecuador’s highest point, but in terms of elevation, it’s far from the highest peak in the Andes. In fact, there are almost 40 more impressive mountains in South America, many of which (like Aconcagua, the continent’s highest peak) are located farther south, near the Chile-Argentina border.

So how is the 30-somethingth highest mountain in the Andes simultaneously the highest point on Earth? The central problem here is that Pythagoras, Columbus, and your elementary school teachers were all wrong: Earth isn’t really round. Well, it’s round-ish, but it’s not a sphere. The combined effects of gravity and rotational centrifugal force have pushed the Earth’s mass outward around its middle. Imagine hula-hooping for a few hours after a big Thanksgiving dinner and you’ll get the idea. The resulting shape is often called an “oblate ellipsoid”: slightly flatter at the poles and bulgier at the equator than you’d expect.

This bulge isn’t huge—a deviation of about one part in 300 from a perfect sphere—but it’s enough to mess with cartography. Chimborazo tops out at 20, 702 feet, almost two miles lower than Everest. But that’s only compared to sea level. If we take the equatorial bulge into account—in other words, if we measure what peak is farthest from the center of the Earth—Chimborazo sticks more than 7, 000 feet farther into space than any of the Himalayas do, since they’re located thousands of miles north of the Equator. So, to quote Obi-Wan Kenobi, “what I told you was true—from a certain point of view.”

Hawaiians are quick to point out that Mauna Kea, the volcano that forms the peak of the state’s big island, is also taller than Everest—if you measure from its base. Everest only rises about 13, 000 feet above its base, less than half of Mauna Kea’s 33, 000-foot rise. The problem, of course, is that the Hawaiian mountain’s “base camp” sleeps with the fishes at the bottom of the Pacific Ocean. Give Mauna Kea a fair start by moving it to the Himalayas, and it would be by far the highest peak on Earth.